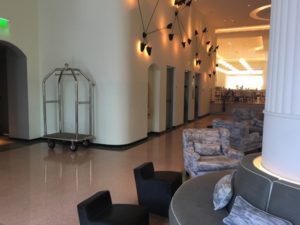 Looking through the lobby to Traymore restaurant

Whenever Christina Ong is involved in a project the result is calm – unless it is a restaurant, say of the calibre of Nobu in The Metropolitan London, or the buzz of the many varied eating places at COMO The Treasury in Perth. The gal was able, when in Miami, to pop north along Collins to the 24th block, to visit yet another luxury COMO hotel, now called COMO Metropolitan Miami Beach (no need to be confused: it still says Traymore in big letters on the front of the nine-floor building, designed by Albert Anis in 1939, and when the Ongs reconceptualised it in 2014 it was Metropolitan by COMO but now it is settled, no dispute, it is COMO Metropolitan Miami Beach, and its restaurant, at the end of the lobby, is now the Traymore). 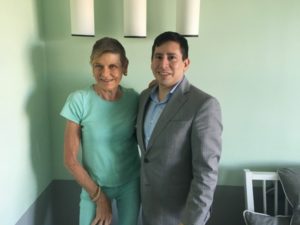 Henry Scott, born in El Salvador, is the lively hands-on GM of this 74-room hotel, and we lunched inside, rather than outside. I went for the COMO Shambhala menu, starting with Lean & Clean Greens, a drink that apparently builds lean muscle, boosts energy and immunity, promotes detoxification – it has apple, fennel, cucumber, spinach, celery, green pepper, spirulina herb, sunflower seeds and macadamia nuts. Next came Seared Spiced Salmon, with cauliflower and quinoa and pomegranate salad, and a dollop of smoky eggplant purée. I must admit that for the rest of the day I felt even more on top of the world than usual – must try to meet Amanda Gale, who devises these COMO Shambhala menus. 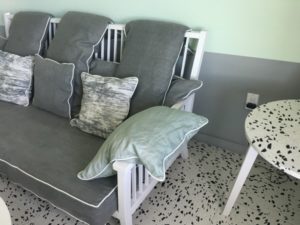 Rooms are all the same colour palette

This is a GM who does a lot of hosting. Every two weeks, each department has both breakfast and an afternoon tea with him (this means that both morning and afternoon shifts are covered), to talk about anything the staff want. He also takes his management team on some pretty touch leadership outings: the last was having to crack complicated codes to get out of a room, which showed which were lone workers and which were best at team work. Then he took me on a tour of the hotel, including up to the hydrotherapy pools on the rooftop – see the top of the story. The bedrooms, designed like the whole hotel by Paola Navone, are seafoam green, white, grey and black, soothing, and calm. 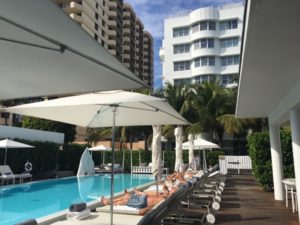 View back from the main, garden-set, pool

The pool, between the hotel and the public beach, is calm, too. It is one that you laze rather than party around, though you could well party back at Traymore, which is deleting some of its bar’s gins so that it will be down to a mere 30. Afterwards, I came out of the hotel’s front door and looked across Collins at Lake Pancost – whichever way your room faces, you see water. This is a luxury hotel, I thought, to escape the mayhem that you find in some areas along the lengthy Collins spinal-cord road.