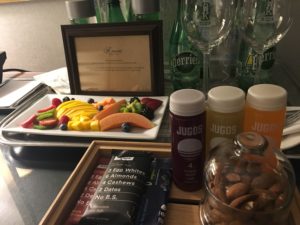 There’s something about Boston’s Fairmont Copley Plaza that makes it feel just like home, which is exactly what George Terpilowski, GM of this luxury hotel, wants (this has to be like a Back Bay townhouse, he told the gal). Part of the appeal is the tradition. The hotel, built on the former site of the Museum of Fine Arts, opened in 1912, designed by Henry Janeway, architect also of The Plaza, New York, and The Willard in Washington DC. Apart from a 1979 fire, which nearly killed then-young Sumner Redstone, little outside has changed – see a current artist’s rendering above (it is one of hundreds of artworks dotted around the six floors). 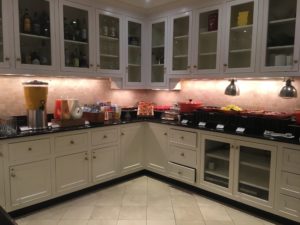 But this is a hotel that, like any lively household, keeps itself up to date. My VIP gift, on arrival at about eight at night, was immensely thoughtful, just right for me. I had a selection of waters, flat and sparkling, and phials of Jugos health drinks, from a local company – my favourite was #4, which was turmeric, lemon, beet and cayenne. Note, too, the RX Bars, each containing 3 egg whites, 6 almonds, 4 cashews, 2 dates and No B.S. – here, my favourite was the chocolate seasalt. Having flown in from London, I was pretty soon to bed, and up long before dawn to find others already in the 24/7 eyrie-like rooftop gym (bliss, these Technogym pieces have Sudoku and the numbers work). Then breakfast, in the kitchen, opened at seven. 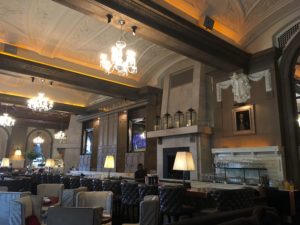 I call it the kitchen as this is what Mr Terpilowski wants. Just as he sees his hotel as the Boston home for regulars, so there has to be a kitchen, and this is the food place of the fourth floor Fairmont Gold Club, immensely popular and you can see why. I also checked out breakfast in The Oak Room. Now HERE is a food success. Remember that the building is 1912-vintage and of course it is heavily protected. The ‘old’ Oak Room was frankly just that, old and past its sell-by date. In 2012 designers Dayna Lee and Ted Burner added over-layers, of sports televisions, and a long bar that wraps itself around the whole interior. Seating in the main space is at high communal tables, or low tables, plus an area for lounging, and outside the main entrance, by a two-way real-look ‘log’ fire that also burns within the restaurant, is a red-carpeted space, with a glass wall of wine bottles, which becomes a Champagne bar at night. 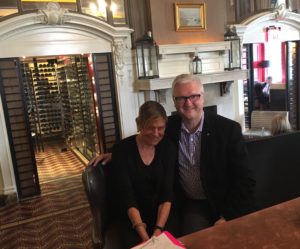 George Terpilowski says 65% of all customers in this invariably-full restaurant are from outside, and many come again and again. They are excited by the ambience, and the casual-professional service, and by the menu, which is amazingly reasonably priced – continental breakfast, called Back Bay breakfast, is only $19 for Greek yoghurt and juice, and your choice of croissant or fruit, and of course hot beverage. It is also creative. Sunday brunch sharing platters include, say. Cinnamon monkey brioche with buttermilk sauce, perhaps with a Charcuta Mary, Bloody Mary with charcuterie skewer.

So the GM and I sat up at the love-seat-for-two at the end of the bar, and looked at the crowded room around us, and he felt happy. And I smiled too, and smiled yet again when going out to this luxury hotel’s super-opulent lobby, more gorgeous than anything that Las Vegas or Macau, with all their will and wallets, can authentically achieve. SEE THE LOBBY VIDEO BELOW