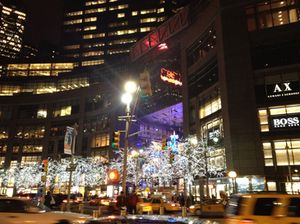 Columbus Circle and its Christmas lights

Columbus Circle was closed to traffic Thanksgiving morning so that the Macy’s parade could go past.  For two hours, starting at nine a.m. gigantic balloon shapes paraded down Central Park West, along Central Park South and south down Sixth Avenue to Macy’s (when Pikachu and Ronald McDonald were being blown up the previous night, Mayor Bloomberg called by to see Snoopy, his favourite). That night, traffic was still flowing round the Circle so the gal was able to get to its signature luxury hotel, Mandarin Oriental New York, part of the massive $1.7 billion Time Warner Center, ten years old this very month. 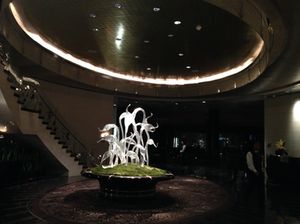 Rise up to the hotel’s 35th floor lobby and you are greeted by a Dale Chihuly – isn’t it amazing that with all his versatility, you still know a Chihuly when you see one, as in the wall displays either end of the main floor of Ritz-Carlton Millennia, Singapore.  Here, you know it is a Chihuly, immediately.  I go up to my room, 3710, and head for the gym, and bemoan the fact there is no time to try the spa, but it is booked up three weeks ahead, anyway: the spa has eight rooms, including a VIP Suite with fireplace, and an elevated bathtub so you can look, through one-way glass walls, out over the south-west corner of Central Park. 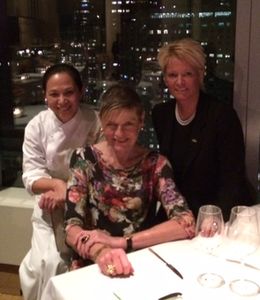 I was dining with a very special lady, Susanne Hatje, who has specialised in opening Mandarin Oriental’s new-look hotels.  She did the Landmark Mandarin Oriental in Hong Kong and then Mandarin Oriental Boston. Both, interestingly, are integrated with great shopping.  She arrived here in New York, with yet more shops, in the Time Warner Center.  Her top chef here is another special character, Toni Robertson, whom I first met at Fairmont Sonoma Mission Inn.  She told us about her son’s performance in the New York marathon, and then disappeared into her kitchens for another culinary marathon of an evening. 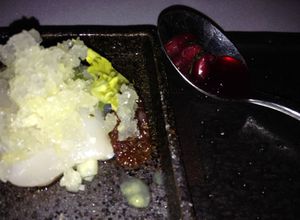 Asiate restaurant is also run by women, namely a chef called Angie and a sommelier, Annie. It has a lovely menu, with choice of three or seven courses, with or without wine pairings. Before we even start the meal-proper a chef’s complimentary is sent out, a slate bearing a scallop sashimi creation and a spoon of pomegranate jelly.  I normally hate anything I have not specifically ordered but this looked good, and by golly it tasted good. We looked down, from our 35th floor vantage point, at the crowds still shopping around Columbus Circle. 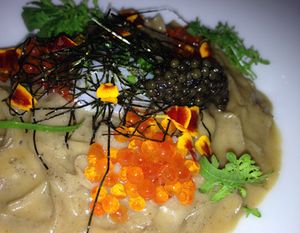 My starter was ‘Buckwheat and eggs’, soba noodles with ossetra caviar and uni cream.  It looked so good, tasted divine.  Had this been with the wine pairing menu, they would have brought a glass of Shirataki Sara Wind Junmai sake. Time to do a bit of research.  Junmai means pure sake, from highly polished rice, and Sara Wind comes from Niigata, Japan, and tasters say it is delicate and pleasing with hints of pear and soft melon aromas and flavours.  I am reminded yet again how international is today’s luxury travel world.  When I was in Tokyo last time I had the ultimate sashimi tasting at Mandarin Oriental Tokyo: next visit will be time to learn more about sake. 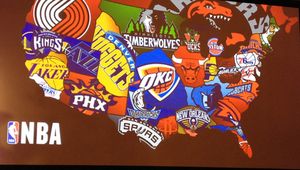 The NBA covers the USA

We had a talk yesterday, at the Leading Hotels of the World convention, by Mark Tatum, EVP Global Marketing Partnerships for the  National Basketball Association NBA (which in UK signed a deal, November 28th, 2013, to show matches live on BT channels).  Mark Tatum’s players are keen users of luxury hotels.  I asked one of the players what he wanted in a hotel: a long bed and comfort, he said.  Mandarin Oriental New York is, to my mind, very comfortable. If I were a seven-footer playing basketball I would take a couple of circuits of Central Park’s southern loop, just across Columbus Circle, pop into some shops at Time Warner Center (The Art of Shaving, and Coach, perhaps), laze out in the spa – and head for more of that buckwheat and eggs, this time with at least one glass of Shirataki Sara Wind Junmai sake.