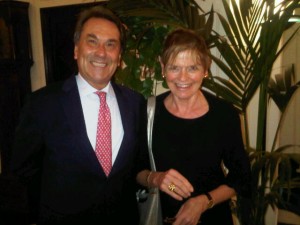 The oh-so-Italian Hotel Splendido Portofino has always been a magnet for the stars.  Framed photos of Clark Gable, Ava Gardner and many more adorn corridor walls, which are also decorated with exquisitely-painted trompe l’oeil moulding.

The 64 bedrooms, which will be complemented by five completely-new suites for the 2012 season, which starts March 30th, 2012, have off-white walls that similarly seem to have three-dimensional moulding. Wood floors hold floral-patterned woven rugs. Bedheads are cream cane-work. Pale blue robes are Frette, China is Richard Ginori.

This is Italy (and I am sure all of the 205-strong team – run by one of the most enthusiastic fireballs imaginable, the totally-charismatic GM, Ermes De Megni – are Italian, too!). And visitors, regular visitors, come back for the colourful warmth of Portofino, the village – and its people. 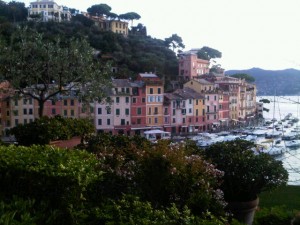 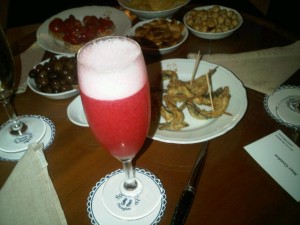 Ermes came in to say hello on a Sunday evening, yes a Sunday. He urged a local cocktail, a Canaletto, pro secco with raspberry juice.  The bites that came along with this included crisp-fried baby sardines and this girl, who does not ‘do’ snacks, ate the lot.

There were Ligurian pastas on La Terrazza’s dinner menu, but I was, fortunately, lured away by what turned out to be the best-selling Spaghetti Elizabeth Taylor.  Apparently the diva asked for ‘spaghetti and tomatoes’.

What you get, now, is a copper cocotte brought to the side of your table. Using a pair of spoons, one of the servers deftly served the pasta on to a flat plate.  The spaghetti, marvellously al dente, was smothered under a ‘hat’ of cooked baby tomatoes mingled with sun-dried tomatoes.  Freshest grated parmesan went on top.

Oh my gosh, was it good – especially with the local dry Lupi Le Braje Ormeasco di Pornassio Superiore, Liguria. Next visit, I promise to keep space for the copious cheese selection, which  includes a rare Ricottina di Pecora Sopravvissana, from a near-extinct breed of sheep (the hotel owns a few, on a nearby farm). 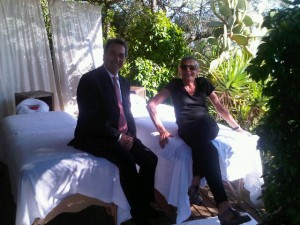 Outside spa - along the Mata Hari path

One morning the aforementioned Signor De Megni showed off his spa, which he moved this year from its former site, down by the pool, to inside, up on the second floor.

Sensible move, Ermes, no girl likes trotting round a pool in a robe, to and from the spa, especially when she has just had an Aromatherapy Associates facial and she knows there might be Rod Stewart or George Clooney lounging round the pool of this Orient-Express hotel.

Now the spa is a heavenly white cocoon, the only colour coming from pale yellow roses on each treatment bed.  Ermes then rushed me along, at his usual breakneck speed, about five minutes’ hike along a lush garden path named Mata Hari. 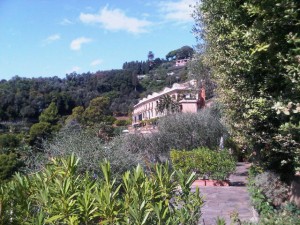 From the outside spa suite, look past the main hotel to Rex Harrison's house

At the end is a private outdoor sala, for couples’ massages. You look down, to the harbour and across to a villa formerly owned by Silvio Berlusconi.  You look up, to a villa once owned by a former regular guest of this luxury hotel, a certain Rex Harrison who, like me, loved the area so much he bought his own place.