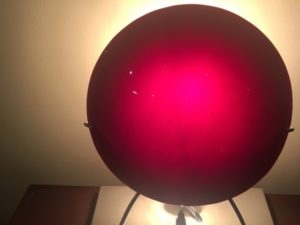 Colourful light, on a corridor table..

An article in the Wall Street Journal the other day covered the growing trend in the USA for smaller weddings, say asking 30 close friends and family rather than a 300-strong mass that includes work colleagues and distant cousins. Apparently the overall spend is about the same. You pay a lot more per head, giving guests the time of their lives. This, thought the gal, opens up all kind of opportunities for luxury hotels to offer their Presidential Suites for weddings. The 20-floor, white, ship-like Mandarin Oriental Miami, is on Claughton Island, connected to the mainland by a 300-yard road bridge to 8th Avenue, and thus to Brickell. The hotel’s Oriental Penthouse Suite #2001 would be perfect for weddings: 2,365 sq ft of indoor space plus balconies looking down and out at the ocean would easily accommodate bride, groom and 28 guests, and in such style, too. 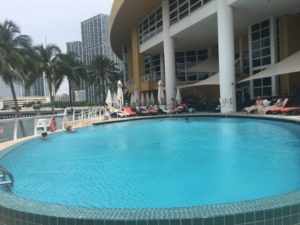 See the video of the suite, below. Since some bridesmaids wear black today, they would feel particularly at home at a wedding here as an historic Chinese robe hangs, behind glass, in the suite’s foyer (see a close-up, above). Black was the most dignified colour for noblemen in the Xia Dynasty, which lasted from the 21st to 17th centuries BC, and although I am sure the hotel’s owners, mainly Swire, have spent heavily on artworks here, this robe is undoubtedly not as old as that. Elsewhere throughout the 329-room hotel, colour is brighter. Bathroom necessities are in brightest apple green, exactly matching green and black fabric beach bags that are here for you to use. This hotel is unique, by the way, in that it has its own beach, big enough for about 30 – hotels along the Miami Beach coast know that all beaches there are public, which makes them impossible as wedding venues. You could also hold the ceremony by the Mandarin Oriental’s pool. 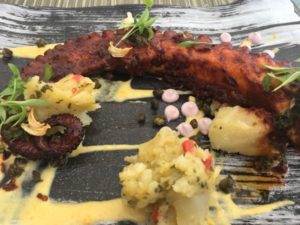 Octopus, with potatoes and a myriad other tastes

For a truly memorable occasion, you might dine in La Mar by Gaston Acurio, the Peruvian would-be lawyer who was diverted to food, and while studying at Le Cordon Bleu he met, and later married, a German chef, Astrid Gutsche (they now have two daughters, and, between them, have 44 restaurants around the world). Gaston Acurio comes to visit his restaurant here twice a year but he always has a key disciple cooking.  I had a cebiche (ceviche) sampler, which turned out to be three different ceramic dishes on a long tray. From left to right, I had cebiche classico, with fluke; then a spicy cebiche barrio (yellowtail snapper, clams, mussels and crispy calamari rings), and, on a right, a cebiche with salmon. I followed this with one of the skewer-grill dishes, an octopus anticucho, with mortero potatoes, chimichurri, botija olives aioli, capers and garlic chips. One of the joys of this meal, also, was meeting chef Florela Cornejo – in eye-dazzling whites – who came out personally to explain every dish. 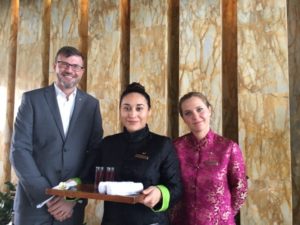 Yes, there is lots of colour at this luxury hotel, and every now and again I have to remind myself that the Mandarin Oriental brand is not North or South American but Asian – as I left, GM Robert Lowe, who was born in Argentina, was standing with a couple of colleagues, one in a bright Asian jacket. Outside the front door, 15-foot coloured bamboo poles stick out of the turning circle. Is this American or Asian? I am reminded of the coloured sticks below, as if supporting, Toronto’s Four Seasons Centre for the Performing Arts, designed by Jack Diamond, the South Africa-born architect whose other works include the Montreal Symphony, and St Petersburg’s Mariinsky Theatre. Interesting the bursts of colour – which include the Shanghai Tang boutique in the soaring lobby – in no way detract from what is the noticeable overall calm that is Mandarin Oriental Miami. Yes, any lovely lady in a white bridal gown would be very happy to have chosen this as her venue. NOW SEE THE VIDEO OF SUITE 2001, BELOW