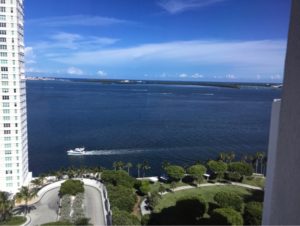 Looking out to sea

Last time the gal was at Mandarin Oriental Miami it was colour that sprang to the fore – the bright apple green that features in the lobby’s Shanghai Tang store, and as revers on some uniforms. This visit, it was the hue of nature that provided an instant touchpoint. An airship flew over (see above) as the Mercedes purred up the slope to the main entrance (about the same incline as working at 18-degrees on one of the joggers in the luxury hotel’s gym, which of course is 24/7, and the equipment is Technogym, with a full Arke set, and there are plenty of apples, both green and red).   The same blue provided a backdrop, looking out of the 19th floor elevator lobby towards the ocean. 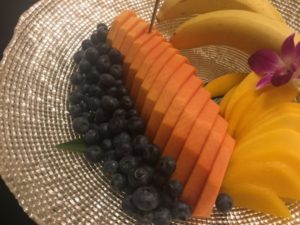 And there was colour, too, in the fruit bowl in 1910, the Mandarin Suite. How clever of someone not only to find out favourite fruits but to give plenty of them, and rather than use the dinky plate provided I found a big-size Bauscher platter in one of the cupboards in the bar area. Once again I thought how very American it is to give a built-in bar counter: hotel owners have installed corner bars in rooms in many parts of the world, for decades, and they sometimes still do, in new hotels, but then some Americans have bar counters in their own homes, something I do not recall seeing in the private sanctums of any other nationality. Honestly, someone had gone to endless trouble to make me feel really at home. The bar counter held copies of today’s best English-language newspapers, the Financial Times and the New York Times. 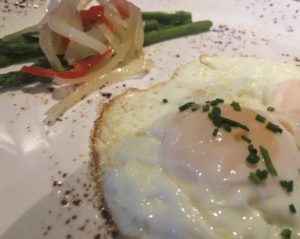 Making guests feel at home is one of the many components of today’s luxury, which is, of course, different in the eyes of any beholder. Breakfast the way you, and only you, want it is only one ingredient of this recipe of success. I could easily, and joyfully, have breakfasted in 1910, perhaps on a cruiseship-like balcony looking far out to sea – see the video of my temporary home, below. But I was meeting Greg Nunez, temporarily running the hotel as the GM, Robert Lowe, is in Santiago to help with the transition, this very day, Monday August 1st, 2017, of what will in a year become Mandarin Oriental Santiago: until then, it will be Hotel Santiago. Greg brought along his colleague Shara Kirton, and what a fascinating breakfast it proved to be. Shara is a would-be fashion executive who after graduating in Marketing and PR was steered into digital marketing, which she now directs for the hotel. 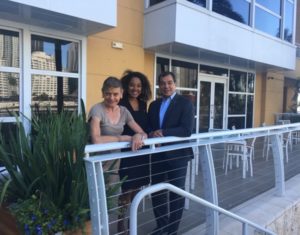 Unlike another social media friend, Tiffany Dowd, also known as Luxe Tiffany, who seems to have four cellphones, also known as devices, Shara works with two, to be ultra mobile on both. She showed me how she can post something in under quarter of an hour, and overall, best reactions by far come from beautiful scenic shots. So after yet another cup of excellent breakfast coffee I went back up to 1910, to see what reactions I would have. I admired the choice of books that someone had provided, a variety that included Ermenegildo Zegna, his story; The History of Relativity by Jacquelyn Mitchard; John Hemingway’s Strange Tribe, and We Are Not Ourselves, Matthew Thomas. But then I looked out of the all-wall windows again and I saw THAT VIEW. This is a luxury hotel with many rare memories – SEE MY VIDEO BELOW.