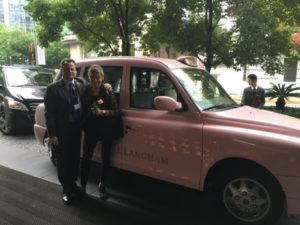 Here is another of Shanghai’s outstanding luxury hotels that makes the gal feel good. The Langham Shanghai Xintiandi stresses the ‘in the pink’ flavour as much as it can. Arrive in style, in a pale pink London taxi-cab, a suitable partnership since the main producer of London’s black originals, The London Taxi Company (formerly Manganese Bronze), is now owned by Geely, of Shanghai. At the hotel, various young ladies in pink and white Chanel suits, complete with pearls, await to greet, and to take you up to one of the 96 bedrooms – best is to be on the 27th floor, handy for the 27th floor Club Lounge, a mammoth space where Ken and his colleagues seem to print out and distribute the world’s newspapers on a non-stop basis. 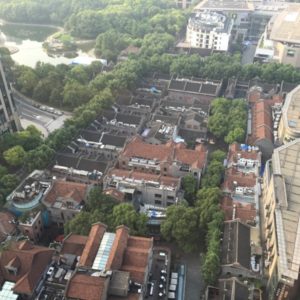 View down to Xintiandi

There are many good reasons for choosing one Shanghai hotel over another. If you have business across the Huangpu river in Pudong, it might sense to stay there. For ILTM, at the Shanghai Exhibition Centre, anything on this side, Puxi, is easier. Puxi’s Xintiandi area is great for nightlife and boutiques, and views of greenery. I look down from 2727 at Xintiandi’s park and lake, all man-made – the lake is emptied every April and October, for Shanghai fashion weeks. 2727, incidentally, is another of these Shanghai-signature clever suites, where you walk around and around, one way or the other, as if minimizing the distance you are walking, not going back and forth, but, at the same time, you are cleverly maximizing your efficiency, which gives you just a little bit more time, to do whatever. Yes, anything, and any hotel, that allows today’s luxury traveller to save even a time amount of time wins in today’s stakes.  No-one likes waiting, for elevators, for room service that was supposed to arrive five minutes ago, and so on and so forth. 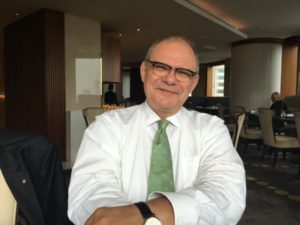 I do admit to a growing addiction, by the way, not only to saving time but also to any gym that allows me to work out and simultaneously, while doing the treadmill at breakneck speed, to listen to a good television channel while playing sudoku on the screen. I was smiling broadly when I returned up to my temporary home, and discovered that the toiletries are Laura Tonatto, specially packaged for the hotel’s Chuan spa. The supplies also include the back brush that should be essential in any top-class hotel (the ultimate back washer is also the recyclable long and narrow back wash towel in my shower). 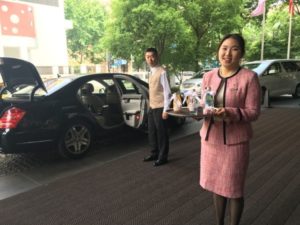 Sven Isberg, who runs this luxury hotel, is not wearing pink – and despite having extremely extensive dental surgery less than 24 hours ago he is apparently now unaffected, especially when it comes to smiling.  He told me about the revitalisation of his lobby, where a top singer starts in a couple of weeks. We talked about various things and then he had to go off to his morning meeting and I had to leave, sadly. Having arrived in a pale pink taxi I left almost incognito, but see my farewell dispatchers to the right, and WATCH THE VIDEO BELOW.