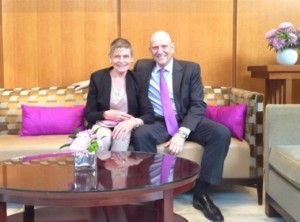 Who ever said General Managers were dull grey men in grey suits and sombre ties? You certainly would not find anyone fitting that generic description at Four Seasons Mumbai, in Worli. It was opened, in April 2008, by Armando Kraenzlin, who drove around town in a bespoke bright scarlet Ambassador. He then moved back to the Maldives and the luxury hotel is now in the hands of Andrew Harrison, who climbs mountains, plays tennis, cycles like mad and puts masses of colour into this place. 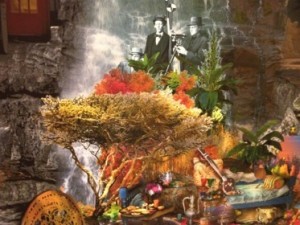 The 202-room hotel has a partnership with Volte Art Projects. I love the pieces on display right now. In the lobby are three double-spreads of electronic ‘books’, each on its own stand. Above the pages illuminated words flicker – the artist is a Delhi women’s activist, Sheba Chhachhi. My favourites are probably the two pieces by Ranbir Kaleka, born in the Punjab in 1953. They are both mammoth digital images on canvas. One, in the lobby, is Urban Utopia 2013, a huge 32 by 52 inches. 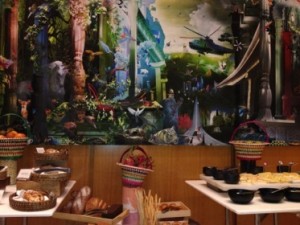 Another Kaleka is up in the private members’ club on top of the 33-floor hotel. Somehow he manages to combine ancient and modern in his work, which is quite appropriate since the club is a traditional club, dark and masculine, but right next to it is the rooftop Aer Bar which, thanks to a German customised tent top designed to withstand 120 miles-per-hour winds, means it can be used year round, even during India’s annual monsoons. Yes, the art is everywhere, and it makes the hotel memorable not only for its service. 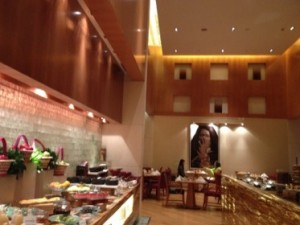 An enormous face stares the length of Prato

The chief concierge, Valencia Albuquerque, for instance, is one of those gems who remembers your name, even from a year back, and also knows instinctively what you like, or what you might like. This is why, I am told, this luxury hotel, not even six years old, has one guest who has checked in a total of 150 times staying in all over 350 nights…