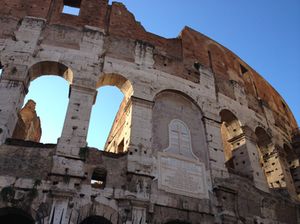 The Colosseum, close up

Finally, in Rome … the chance to get into bed, as it were, at the Colosseum (or Coliseum, both are right), commissioned by Emperor Vespasian in AD72 and finished by his son Titus eight years later. The gal is spending this last night in The Eternal City in Palazzo Manfredi, the luxury hotel that stands on the site of what was once the gymnasium for the gladiators to train up, to do their pushups and their squats and bends and goodness knows what else before going across the road to the Colosseum to perform to delighted crowds.  The only recent performer apparently has been Sting, singing rather than fighting. 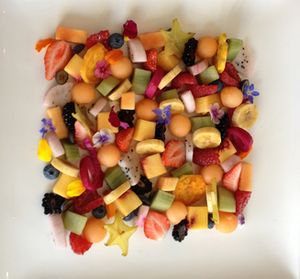 Palazzo Manfredi, a Relais & Châteaux owned by the Manfredi family, is itself a work of art.  The six-floor building, literally a hundred yards from the Colosseum, is Italian residential, inside.  Girlahead’s tip, but keep it to yourself, is to take the Colosseo Suite, which stretches the whole depth of the building.  Your three bathrooms (sic, more anon) look out over via San Giovanni in Laterno.  Then, via windows looking to the Colosseum, to your right, windows in your salon look out over the hotel’s entrance, in via Labicana, and to a lovely park opposite, ideal for running. The suite is basically silver although you may have colour in the form of welcome fruit. 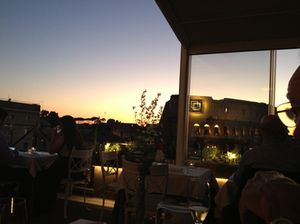 The Colosseum at sunset, from Aroma restaurant

Why three bathrooms in this open-plan suite? Romans had hot rooms, cold rooms, tepid rooms. Here, one glass-off area is toilet, one is shower (with Hafro sound and light, which I bet the Roman did not have), one has two marble washbasins.  Elsewhere, there is a sunken circular tub next to a wifi-enabled Technogym bicycle, with a set of weights (work out and wash, next to the Colosseum).  Another Girlahead tip, you absolutely must watch the sunset.  Up on the hotel’s rooftop is Aroma, with indoor bar and dining area, and an outdoor terrace with slide-back glass roof and walls.  Dott Goffredo Ceglia Manfredi, thank you for investing so heavily, and with such quality, when you redid your palace in 2010. 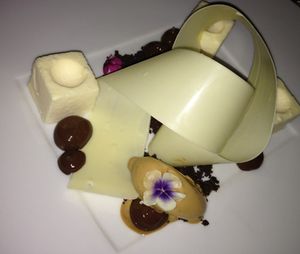 And you must dine up here, though book ahead as every table was taken at dinner last night.  Giuseppe Di Lorio’s cooking is small-town-freestanding, and all the better for that.  I feel it is cooked with passion, and served the same way.  I start with a courgette and aubergine terrine with courgette flowers stuffed with spinach and ricotta, go on to already-sliced Argentinian entrecote, wagyu-style, scented with rosemary from the chef’s garden. One of the four of us has a white chocolate dessert, while another oohs and ahs at his chocolate soufflé.  The menu changes regularly, says Bruno Papaleo, the versatile boss of this place (so versatile he personally fixed my MacBook Pro a couple of hours ago). 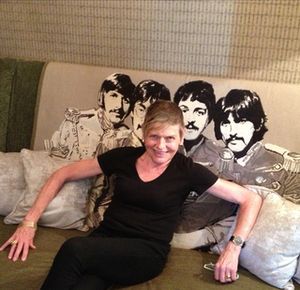 Back in my ‘little room’ (ha ha, it is huge) I also ooh and ah, at the nine-by-nine foot standing silver-framed darkened mirror.  This incorporates my television, apparently.  I check the books on shelves just inside the main door.  One is Pop Art 1956-1968.  Now this exactly encompasses the launch of The Beatles and I remember tales of a how a ticker-tape machine in London’s Fleet Street spewed out, late one Friday night in 1964, the fact that The Beatles were doing some concert or other.  Who on earth are the beatles,? asked the legendary Editor of what was then the UK’s top weekly newspaper, the Sunday Telegraph?  Well, here The Beatles are downstairs, in the hotel’s charming and bijou lobby lounge.  John, Paul, George and Ringo, even today’s best Italian designers love you – Giorgia Dennerlein did this place, by the way. 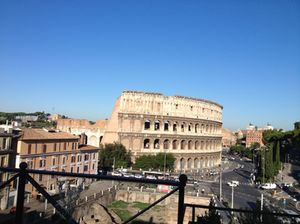 Any time of day, this place, this entire area, is dominated by that Colosseum.  Tod’s owner Diego Della Valle, who is actually Florentine, is spending 25 million euro on restoration, which has not yet started.  Already the newly-appoint mayor of Rome, Ignazio Marino, has realigned some traffic around it in an effort to protect the building’s underpinnings.  I am told that the whole thing, 188 by 156 metres in all and holding up to 55,000 in its glory days, is slightly leaning.  Head for this luxury hotel soon, and take a tour (at special reduced rates for under-18s and over 65s).