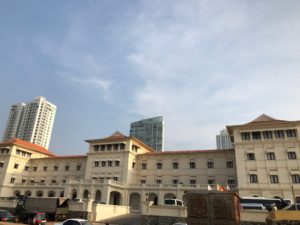 All cities-with-a-past have at least one iconic hotel – Buenos Aires has Alvear Palace, Helsinki has the Kamp, Singapore has Raffles and so on. Colombo has the Galle Face. The gal thought about this while sitting on the terrace, big enough for a cocktail for 20, of room 1007, looking west as the sun set over the Indian Ocean, shown above. Even the location is pretty striking. The main, North, wing was built 1864, facing along Galle Face Green. This was a luxury hotel that was always kept up to date. In 1894, for instance, two billiards rooms were installed, one for gentlemen and a smaller one for their ladies. It still has two ballrooms, a massive rectangular room that is entirely white, and moulded so that you feel as if you are inside a wedding cake, and an octagonal ballroom for slightly more intimate affairs. 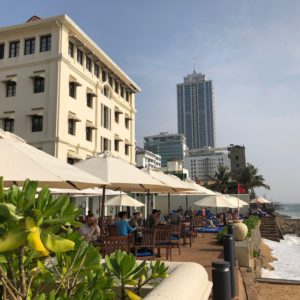 Looking up from pool to South Tower

In 1920 another wing, the South Tower, was added, and outside this wing, just below room 1007, is the pool, a gathering place for the many tourists who stay here. This is also only a few yards from the Verandah, a restaurant that serves buffets, for breakfast, lunch, afternoon tea and dinner (one memory of this is the meticulous attention the stewards pay to cleaning up after each meal service – whenever I walked past between-meals there were the empty silver chafing dishes, and rows of copper pots, all sparkling, and all set in exact military order). We dined in the dinner-only restaurant, Sea Spray, which has the ideal à la carte, not-buffet menu. There are little pictures of fish and a chequerboard shows what fish can be cooked in which way – I ended up with tuna sashimi followed by a grilled tuna steak, both delicious. 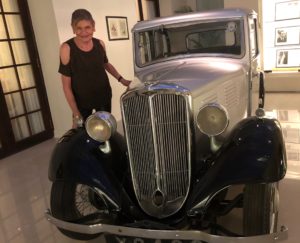 The car that belonged to HRH The Duke of Edinburgh

I wonder what the Duke of Edinburgh ate when he was seconded here in 1940 – and did he, too, admire the piper who plays when the hotel’s flag is taken down every night at sunset (see a video below)? What we do know is that he paid £12, in old English money, to buy a 1935-vintage green Standard 9 car, a little the worse for wear as it was missing a petrol cap – he used the cap from a bottle of codliver oil. Now the car, lovingly restored and a pristine silver, is one of the treasures in the hotel’s museum – you can read about it, too, in Delightfully Imperfect: A Year in Sri Lanka at The Galle Face Hotel, a memoir by journalist Paul Harris of the year he lived in the hotel. And then it was time for bed. 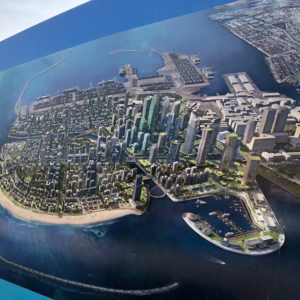 One rendering of the futuristic man-made island

A quaint and rather sweet touch is that room 1007’s four post bed has an upper tester of macramé and lace. An antique wardrobe, occupying most of the room’s end wall, has been adapted to accommodate the safe and television (flat screen, of course). And, despite its age, Colombo’s iconic luxury hotel has excellent Wifi, a feature that I can honestly say was true throughout my tour of various hotels. I had to leave Galle Face way before sunrise, so I never saw the Verandah’s breakfast buffet. But my wake up call, and my coffee, came as requested, the car was waiting and ready, and I was sent off with breakfast-to-go – this was so thoughtful, and unexpected. My thoughts on the way back to the airport ranged from memories of Colombo of the past, and thoughts of the future. Looking at blow-up renderings pasted along the northern end of Galle Face Green the man-made island that is being constructed there, at lightning pace, will truly present a futuristic world city. NOW SEE VIDEOS OF THE SUNSET PIPER, AND ROOM 1007