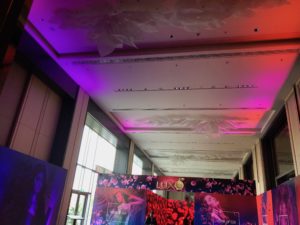 Ballroom, for a function

The gal had not been to Colombo since Sri Lanka’s civil war ended, and the arrival was auspicious – the immigration officer, in sparkling whites with a smile from one ear to the other, stamped my passport exactly where I asked, and Shangri-La’s obvious lavender-hued Jaguar purred into action. There is lots of colour around: this two-month old luxury hotel might have colour-free crystal Lasvit chandeliers, many in lotus shapes, but guest relations’ saris are turquoise and teal, walls’ art works are big and bold, and any event in the ballroom seems to use as many colours of the rainbow as possible. See also the hotel’s pool at sunset, above. 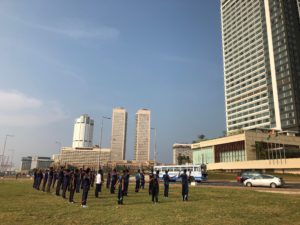 The hotel, on the right, at sunset physical-jerks hour

The 32-floor building will eventually be part of a mammoth retail, offices and residence towers complex, representing a Kuok investment of some $500 million. It soars up behind the famous Galle Face Green sculpture of legendary former Prime Minister Bandaranaike (who rejoiced in the forenames Solomon West Ridgeway Dias), a couple of hundred yards south of the former InterCon, now the Kingsbury, and the Galadari, once Le Méridien. For old times’ sake I walked along Galle Face Drive to the Galle Face Hotel, passing the same traders and local picnickers who have been here since time immemorial; goods still include elaborate paper kites, but small stalls now have solar panels. Amazingly, all 500 hotel rooms here seem to be full most of the time. 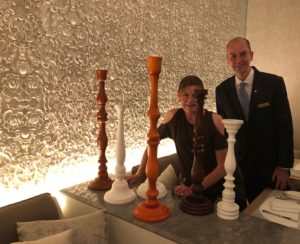 GM Tim Wright in one of the Capital Grill rooms

Indians want to visit, and thanks to Emirates, which has four daily flights from Dubai, and Asian carriers, plus Sri Lankan, there is masses of airlift. And Shangri-La has a growing brand awareness. There is some tourism, but there is an enormous lot of business business, coming from banks and all the other entities that make a capital city grow. In addition, one year ago – after Tim Wright arrived here as GM of the hotel – ‘they’ started making sandcastles out at sea, in the Indian Ocean. And just as one load of sand followed another and another to create Palm Jumeirah off Dubai, so here, in under 51 weeks, an enormous area is being built up out of the sea. 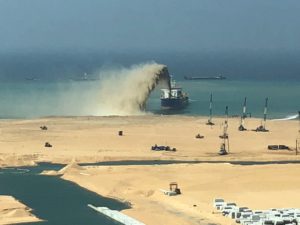 A contractors’ billboard announces this is a $15-billion investment, coming from China Communications Construction Company under its Chairman Liu Qita. Out there in the ocean, or now on top of it, three shifts toil, 24 hours a day, building what will be one of the ends of China’s One Belt initiative (it will have hotels, malls, theme parks, hospitals, residences and offices). Fine, if there are all those buildings coming up on the new island it is certain that the thousands of people living and-or working there will flock to best-in-town when it comes to dining. Colombo’s Ministry of Crab restaurant in the Dutch Hospital Shopping Precinct has topped the popularity stakes but already, since the opening of this luxury hotel, its restaurants, all designed by Ryoichi Niwata, have become sell-outs. Obviously, being Shangri-La, there is Shang Palace for Chinese; buffets at the superb all-day Table One are memorable (try the grill’s prawns, with a make-your-own salad), and and Capital Grill serves sensationally juicy and flavourful Tasmanian steaks from the Greenham family’s Cape Grim farms. Book now! NOW SEE A VIDEO OF TABLE ONE, AND THEN CORNER SUITE 2123, SHOW THE EXTERNAL DREDGING