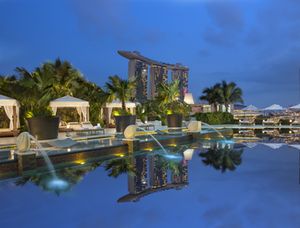 The pool at night

It is such a refreshing change, when travelling, to find a product that just gets better and better.  The gal had not stayed at the Mandarin Oriental Singapore for seven whole years – seven year itch and all that.  During her absence, the luxury hotel seems to have gone through a complete metamorphosis.  The structure is still the same, a 21-floor ziggurat with open-atrium soaring from fourth floor to the top. 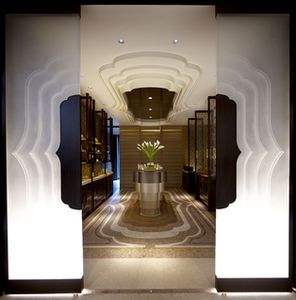 The pool is where it was, on a fifth floor terrace, but it seems bigger, better…

The spa, which is only two years old, is stunning. Designed by AB Concept, the entrance is like a jewel box.  You want to open it and see what is in there.  Inside are six treatment rooms with lovely multi-height ogee shapes in the ceiling, to look at when you are lying there, on your back on a bed. Most operators realise that when you are lying on your tummy, looking down through the head ‘hole’, it is refreshing to look down at, say, a bowl of fresh orchids. 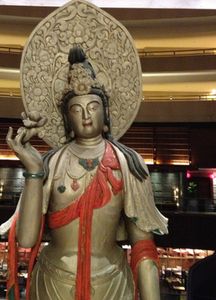 A deity on a landing

There should be a mandate to all spa designers to make ceilings interesting. Ah ha, says the resident deity in the photo to the left..  You could be on to something there.  Spa design needs to be more realistic, sensitive to customer needs and to the locale (what is the point of an Asian design when you are in a spa in Germany, say, and would anyone put English roses into a spa in Mexico?).  This deity, by the way, is by elevators at the hotel.  The elevators soar up through the centre of that open atrium. The deity has a knowing look about him, as if he is fully aware how successfully this hotel has revamped itself, brought itself up to date.  Gosh, the hotel even has a signature drink, a Mandarin Sling – which, if you really want to known, is a concoction of vodka, orange liquor, Midori, passionfruit, peach puree, orange and lemon juices… 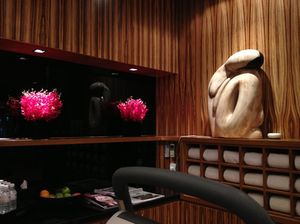 Deity, or at least a shape, in the gym

More changes. Take the Italian restaurant, Dolce Vita, which I remembered as a makeshift table and chairs affair in the covered-over section of what had been the poolhouse.  Now it is a sleek white with lavender highlights restaurant, and really popular. The gym is where it has always been, next to Dolce Vita, but now it has dark-mirrored upper walls and ceilings, from which hand deep maroon Murano chandeliers, which reflect in the walls. One wall is nearly all – plain – glass, so you look out into lush undergrowth as you burn the calories.  In one corner there are deep pink orchids and another deity. 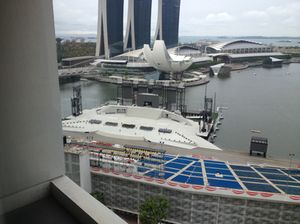 Daylight view from 1901, looking down at military practising on the event stage

After a considerable amount of exercise I headed up to 1901, a 620 sq ft corner suite with a French window that actually opened, on to a triangular terrace about five by five by five feet.  Now sure you are supposed to go out but I needed to listen to the military practising on the arena below me.  They are rehearsing, now nearly night and day, for Singapore’s National Day parade, on August 9th.  I went across the 19th floor skywalk, one side of the atrium to the other, to the Club Lounge.  This is the reason why people return again and again – as I went in, one Australian woman, just about to fly home, gave one of the attendants the biggest hug imaginable. 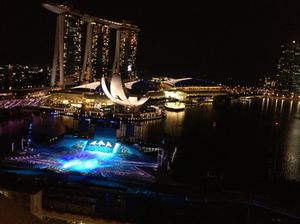 And the same view at night, as they practise colour drops

Nothing is too much trouble for these people.  Leslie and her colleagues bent over backwards to try to get me on the flight I needed (they had all kinds of ‘secret numbers’ to airline contacts).  At breakfast, having large tubs of both salted and unsalted French beurre Echiré butter said Style.  At cocktail hour snacks, having a buffet with attendant chef meant many guests were making dinner, but sadly I had plans, so first I padded back to 1901, and looked down again.  Now they are rehearsing back drops for the National Day parade.  Really, this practise lark still has to go on for another couple of weeks – meanwhile, those lucky enough to stay in this luxury hotel get a bird’s eye view.