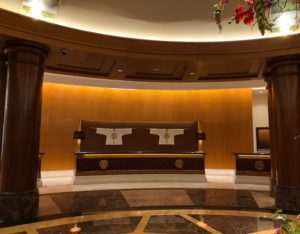 Enter Mandarin Oriental Washington DC and you know you are in the big wide world, in which China plays a major role.  Karen Kent’s interior design echoes this feeling, most suitably as this luxury hotel is now 90% owned by the Mandarin Oriental Hotel Group, headquartered in Hong Kong. Doormen wear bright scarlet jackets and caps, which unfortunately have to be covered by plastic shower caps when it rains. Go in, turn right and there is front desk, with two exquisite historic robes hanging over. A little further on, still on the right, the Last Empress of China is shown flying over Washington – the gal found out that the painting (above) is by Zhong-Yang Huang, born in Guangzhou in 1949. 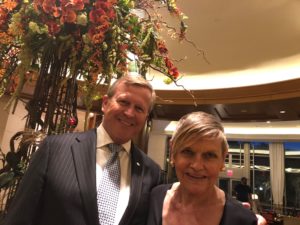 The hotel’s GM, Adriaan Radder, is the child of a Dutch baker but it was his older brother who was expected to go into the family business.  Adriaan therefore became a serial hotelier, trying big properties in Amsterdam and Jeddah, and boutiques in Charlotte NC and Nassau, and for a short time he and his wife were going to open their own bed-and-breakfast.  Fortunately, in plenty of time, they decided that would not work so he returned to proper work, and now he heads a 400-room hotel that has really come into its own. When it opened, early 2004, it was rather lonely, standing by itself at the Potomac end of Maryland Avenue. 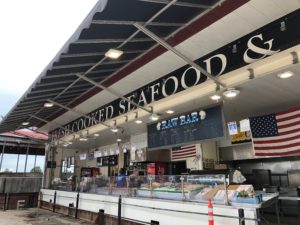 Fishmarket scene at The Wharf

Now, however, this area has finally begun to take shape, with government offices and serious headquarters all around. The much-delayed Wharf project, only ten minutes’ walk from the hotel, is now open (save time by picking up one of the drop-anywhere scooters that have infested Washington and many other top US cities). As well as offices, that here seem to be tech-centric, the wharf, as its name implies, is waterside, with a fish market, and I counted over a dozen new-look restaurants. Culture comes from the Wharf’s Anthem Theater, advertizing a busy programme; October 18th is Chvrches, followed two days later by Joe Russo’s Almost Dead and, on October 25th, Nick Cave and the Bad Seeds. 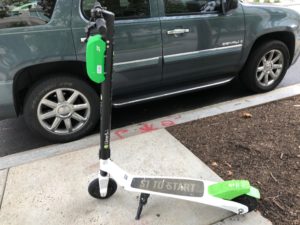 There are scooters-to-go, on many street corners

This is a luxury hotel, however, that works with more serious arts.  It is main sponsor of the Kennedy Center Honors, which this year, on December 2nd, 2018, will give lifetime awards to a list of greats that includes Cher and Philip Glass, and the entire production of Hamilton, led by Lin-Manuel Miranda.  I hope these honorees will, when staying over, have access to the luxury hotel’s agreeable eighth floor club lounge – and what a nice touch to see the lounge’s array of Morgenthal Frederics glasses, offering different strengths to those squinting to see which bagel to pair with the juicy lox. The hotel has partnerships with this eyewear company, and also with Madison & Mulholland, which puts new books in all bedrooms every month: room 947 – see a video, below – had Wendy Corsi Stau’s Little Girl Lost, Catherine Coulter’s Paradox, and Michael Jordan’s The Company of Demons, a Novel.  Mandarin Oriental Washington preaches the admirable maxim that in life you should always aim up, not down. NOW SEE ROOM 947