Cliveden has often been associated with beautiful women, and it still is. Apparently a buy-out of the entire 39-room luxury hotel a short time ago saw masses of fashionistas (and they turned the new, just-opened lower-floor events complex, which includes a screening room, into a New York speakeasy, complete with temporary old-brick walls, dangling lights and live music). Generally, however, says the gal, this unique property, right on the banks of the River Thames about half an hour from London’s Heathrow airport, is an oasis of calm. 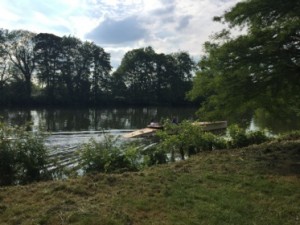 .. go right down to the River Thames

It was so great to be back. The gardens – part of the 376-acre Cliveden estate that is owned and immaculately run by The National Trust – are amazing. The parterres on the back lawn are geometrically exact. I headed along that stretch of lawn, and down 170 steps (spaced four feet apart so difficult to pace yourself) to the river. A slipper launch glided by, silently. You can take boat trips, even for afternoon tea aboard. You can also stay down there, right by the water’s edge, in Spring Cottage, where Queen Victoria used to come for her afternoon tea. 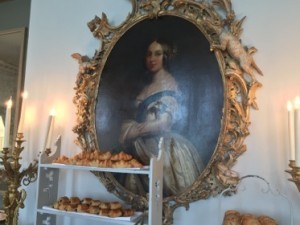 Her Majesty‘s presence is still around. A portrait of her, in the hotel’s restaurant, looks down, as if overseeing the breakfast buffet. The Queen would have approved. This is a quality product. Jars of yoghurt are Yorkshire Dales Bio, mercifully full-fat, preserves are Tiptree, coffee comes in a silver pot, and toast, crust-free of course, in a silver rack. I have a copy of the Wall Street Journal: instead of being given, automatically, a ghastly free newspaper that I do not want I am asked what I would like. That is style. 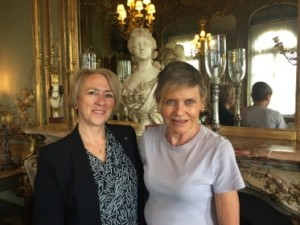 But then Sue Williams, the ‘general manager’ of this hotel, thinks of herself as keeper of the house, in charge of running a stately home. She is so enthusiastic about this life that she seems to live here, nonstop. And when she has a moment she is hunting on Ebay for genuine old drinking glasses to replace, much more suitably, the modern Riedel glasses that were formerly accompanying the cut-glass decanters of sherry that are in all bedrooms. She might, alternatively, be back researching Astor archives at the marvellously-named Museum of Rural Working Life at nearby Reading University: there, she has come across handwritten letters between Cliveden’s former owners, the Astors, and, say, Charlie Chaplin, Emmeline Pankhurst and various members of the Royal Family. 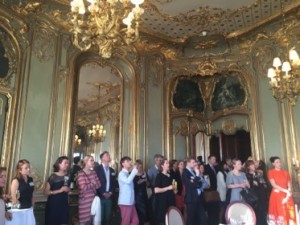 I had the great luck to coincide, this time at Cliveden, with a meeting of the Walpole Society, the collective of top British brands – think Fortnum & Mason, Gleneagles, Hunter, Rolls-Royce and Temperley. After Taittinger and a jazz band out on one terrace, we all gathered to hear Sue share some of the secrets of the house, before moving back out to another terrace, for a jolly good buffet which included a delicately-carved whole Parma ham and sensational barbecued belly of pork (and lots of macaroons for the sweet-toothed). It was one of those balmy Saturday evenings. I thought back to previous eras here, since Cliveden was first built, in the 1660s, for the Duke of Buckingham, who was later to kill the Earl of Shrewsbury, husband of his mistress, in a duel. 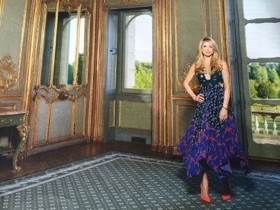 Natalie Livingstone, author of The Mistresses of Cliveden, at the hotel

Natalie Livingstone – she who led me to first discover beautician Linda Meredith, as at Chewton Glen – has written a fascinating history, The Mistresses of Cliveden: Three Centuries of Scandal, Power and Intrigue, Hutchinson (Natalie’s husband Ian Livingstone is co-owner, with his brother Richard, of both the Cliveden lease, and Chewton Glen). Natalie Livingstone got a first in History from Cambridge, and her saga of those ladies associated with this luxury hotel is, honestly, fascinating. It of course includes the story of American Nancy Langhorne, 1879-1964, who came to seek her fortune in England with her son Bobby Shaw; she snared Waldorf Astor but when he had, reluctantly, to inherit his late father’s title she took over his parliamentary seat and thus Nancy Astor became the first-ever female Member of Parliament (MP). Oh and then, of course, there was the John Profumo and Stephen Ward episode at Cliveden, with Christine Keeler and Mandy Rice-Davies… so much has happened here. And yet today it is the epitome of calm.