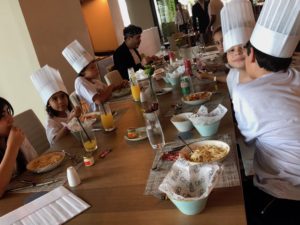 Even the most knowledgeable could be excused for thinking this amazing fuchsia limo above – complete with big eyelashes on the front lights – would be for a Macau high-roller or a Kardashian wedding.  No, it was parked in avenue Lucio Costas in the Barra de Tijuca suberb of Rio, and it had just let out its occupants, eight excited kids, all between six and ten years old. They were invited for a 24 hour stay at Grand Hyatt Rio de Janeiro, and after they had rushed at breakneck speed through the stylish hotel’s lobby they settled down for a quick lunch, in Cantó Gastro. Spaghetti was their lunch and they loved it. 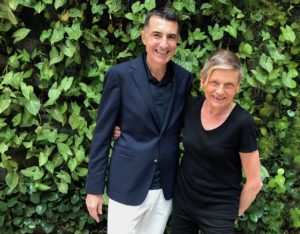 Christophe Lorvo, the Frenchman who is GM of this 436-room hotel, explained that these eight kids are all bloggers and, wait for it, between them they have over 20 MILLION followers.  Look up Isaac do Vine on YouTube – he has just under five million followers there.  His market are kids his own age, fascinated by what he thinks of clothes, of life, and the forthcoming World Cup. Christophe Lorvo was told by his Director of Sales, Patricia Goncalvez, that her son played with a boy who lived in the same block who is an internet sensation. This was the start of the 24-hour away-night. The kids came complete with four adults ‘to supervise’ and a couple of agents. 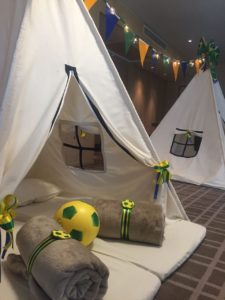 A television company sent along a crew, and each day this week videos will be shown in preparation for the World Cup. This is indeed a mammoth build-up and the kids, and the hotel, are thrilled to be part of it.  Patricia Goncalvez and her team had planned a great 24-hour programme, with games and a World Cup quiz, and burgers for dinner, and then sleep-over, in individual tents all erected in the hotel’s Presidential Suite (would they, I wonder, actually get any sleep? Any old person, like over ten years old, who thinks back to sleepovers will know the word is an oxymoron as sleep is usually off the agenda. Pop-up tents are not new in hotels (I first came across them at Four Seasons Hotel Seoul, where they are so popular that kids clamour to get their parents to take them back there, please). 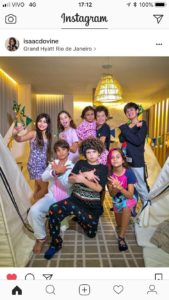 Posted immediately after – and 15,000 likes in three hours

Here, at Grand Hyatt Rio de Janeiro each tent is filled with World Cup memorabilia, for the kids to take home. The boys, of course, are football mad – see a YouTube video of Isaac do Vine, 9, with Brazilian soccer sensation Marcos Evangelista de Morais, better known as Cafu (he must not be confused with the Argentine Alejandro Romero Gamarra, 23, known as Kaku, who has just been bought by the New York Red Bulls for $6.5 million).  Now these kids are not making that kind of money, yet, but they are already, in some cases, apparently sponsored by clothing and other brands. Well, this is a most unforgettable hotel.  Two nights before they were full-house with senior oil executives, bidding at auction for Brazil’s offshore bounty. Tonight they had pre-teens and their minders… and, in between, they merely had me. That is another story, as we will see. NOW SEE A VIDEO OF ISAAC AND KAKU