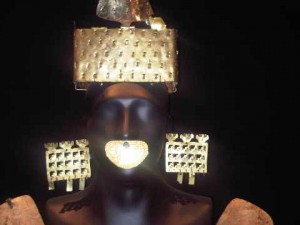 There are times when you see something old and beautiful that is so impressive you just feel totally insignificant today.  Think of amazing structures, say the Taj Mahal in Agra.

Think of a painting, the enigmatic Mona Lisa, or one of the Rembrandts that you can see in the Rijksmuseum in Amsterdam (with copies in the Hotel De L’Europe bedrooms).   The gal also thinks of gold, as in Pre-Columbian jewellery, as in the Museo Larco in Lima. 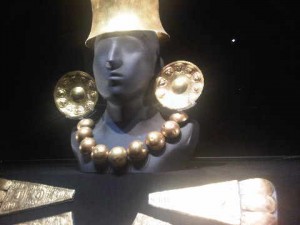 Rafael Larco Hoyle 1901-1966, known as Ray, was brought up on a sugar hacienda near Trujillo, Peru.  He went to secondary school in the USA and on to Cornell, home of hotel-keeping but he studied agriculture, and then went on to New York University to study first business administration and then finance.

He wanted to update the sugar industry, and sure enough he became a sugar baron, breaking records for production and facilities for workers.  Aged 23, he started taking interest in his father’s love for North Peruvian Pre-Columbian pottery. 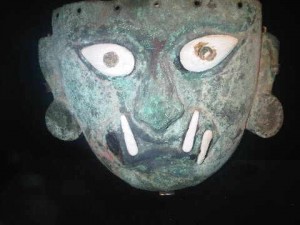 .. or would you prefer a whole-face mask?

And he started collecting.  In the mid-1950s, when he was Mayor of Trujillo, 17 rooms of his house, Hacienda Chiclin, were filled with over 40,000 complete pottery vessels and thousands of textile and wood treasures – and gold, and silver. It was decided to move everything to a dedicated museum in Lima.

This was recently re-designed by a Swedish woman Ulla Holmquist, and it is honestly the best ‘design’ of a museum that I have seen since the amazing Chopin Museum in Warsaw. 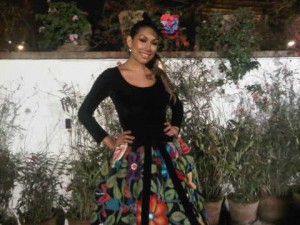 September 2012, a Meche Correa outfit at the SHP dinner at Museo Larco

Rafael Larco’s daughter, Isabel, was guest of honour at a dinner held at Museo Larco to mark ten years of the Sociedad Hoteles del Perú (SHP).  It was organised by the society’s president, José Koechlin, boss of Inkaterra.

We toured the Museo Larco first, and then sat outside, in an L-shaped tent that ‘skirted’ the building.  At the tent’s angle, a giant television screen was to screen various hotel-type videos and in-between, silently, the all-important Argentina v. Peru soccer match being played that evening. 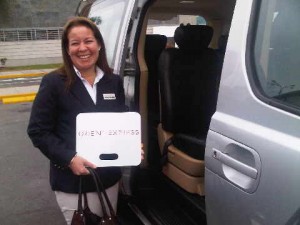 Ana Maria Astudillo is there, to meet me at the airport

There is only one way to ‘do’ Peru in style, by the way, and that is to sign on with the best concierges-cum-nannies imaginable – Orient-Express Journeys in Peru.  You are met on arrival at Lima’s Jorge Chavez airport.

In my case, Ana Maria Astudillo looked after me from the moment I got through customs (very fair, you push a button and if it goes red your baggage is checked, if it goes green you are straight out).

During the next few days she became a real friend.  I heard about her economist husband, her two college-age kids.  Her maid, who comes daily at 0600, has her own maid to do her house – wonder if she has a maid, too?

Ana Maria shows me her hologrammed ID card, which is marked every time she votes (it is compulsory, forget to vote and you are in trouble next time you need a car licence or similar). 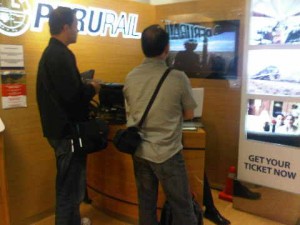 Cleverly, you can buy Hiram Bingham (and other Peru Rail tickets) airside, at the airport

She and her colleagues in Cusco, the Sacred Valley and Machu Picchu treated me as a highly intelligent child. I was picked up on time, dropped off wherever, boarding passes for the Hiram Bingham train, entry passes to Machu Picchu, everything handed over at the appropriate moment.

Small hand-carry bags were given to make travelling ‘up country’ easier, and sturdy Orient-Express luggage labels meant my bags were instantly recognisable.  I like the way that the Hiram Bingham owners, Peru Rail, even sell tickets in the domestic part of Lima airport, clever. It is worth noting, by the way, that you can carry filled water bottles through security on domestic flights. 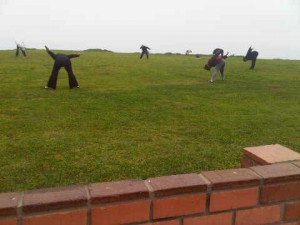 Tai chi on the Miraflores cliff top looks like an L.S. Lowry painting

In the past, the best hotels in Lima itself were the Gran Hotel Bolivar, where they say the Pisco Sour was invented, and the Crillon.  The former is just-about still operating, the latter is being converted to offices. Today, stay in the Miraflores area, where the top luxury hotel is Orient-Express’ Miraflores Park.

The fit love this place.  As well as its own LifeFitness gym, up on the 11th floor roof, this is your base for joining Lima High Society in daily exercise. Fifteen minutes away from the hotel, you can join a tai chi class that looks more like an L. S. Lowry painting. 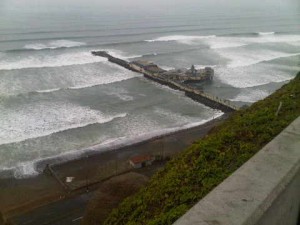 From the hotel, you run through Parque Domodossola, past paracourse equipment, and over Puente Villena bridge.  You are on a clifftop about 400 feet high. Look down at the main highway, down by the sea.

A decades-old seafood restaurant sits lonely, out on a pier.  Up here, as well as runners and cyclists there are maids walking babies, and professional dog-walkers who seem to spend far too much time sitting chatting to each other, and the maids.  Wonder if the owners realise they are not getting their money’s worth?

Lima beans (Phaseolus lunatus) are of Andean and Mesoamerican origin.

Think of Lima and lima beans (Phaseolus lunatus) may come to mind.  I also think of people who without exception in my case are friendly and helpful. The only person I saw smoking in ten days, anywhere in the country, was an American tourist.

Peru has done an amazing anti-smoking job. Couple this with vast numbers of street cleaners, out from 0600 in distinctive gentian uniforms with reflective patches.  There are also, apparently, three types of security, including ‘local’ officers who merely walk the streets. This is all very discreet but it works.  A dear friend says she will walk the Miraflores area any time, 24/7. 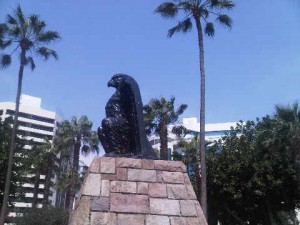 The Miraflores memorial to Jorge Chavez, 23, first aviator to cross the Alps

So here I am, after my morning run.  Back in Parque Domodossola, I am intrigued by the statue – it is a memorial to Jorge Chavez, after whom the airport is named.  What an adventurer.  Aged only 23, he was so inspired by the Wright brothers’ first flight in 1903 that he too learned to fly, in 1910.

Later that year, he set off to cross the Alps, but tragically fatally crash-landed, having achieved his goal. Luxury lifestyle is learning something, every day. And with that, I am back home, at the lovely Miraflores Park hotel…