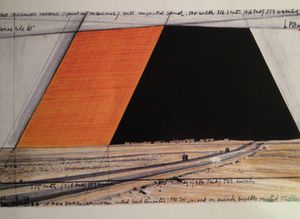 One day soon, all being well, the Empty Quarter desert will bloom with the world’s biggest sculpture, The Mastaba (named for the trapezoidal ancient Egyptian tombs).  Here is a drawing of it. Christo and his wife Jeanne-Claude dreamed it up on a visit to Abu Dhabi in 1977 and it is, well, still in the planning stage. Realised, it will be 492 feet high, 738 feet deep at the 60-degree slanted walls, and 984 feet wide at the vertical walls. The roof will be a horizontal area 416 by 738 ft.  The gal thinks the shape, with added windows, could make a futuristic luxury hotel.  The gal also commends Christo for his annual $10,000 Christo and Jeanne-Claude award in the UAE, a partnership with the Abu Dhabi Music and Art Foundation ADMAF and New York University Abu Dhabi NYUAD. 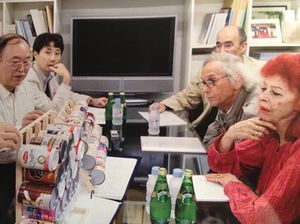 Christo and Jeanne-Claude, right, with the Japanese professors

Christo, the Bulgarian born Christo Vladimirov Javacheff, and his French wife were born the same day, June 13th, 1935 (sadly, Jeanne-Claude died 2009 – until then they were inseparable although they never flew in the same plane). Having wrapped the Reichstag in Berlin and put up The Gates in New York’s Central Park, Christo is still working on a 6.7-miles translucent sculpture over the Arkansas River.  And this, the Mastaba. Designed with the aid of Hosei University in Japan, it will be made of 55-gallon oil barrels, 400,000 of them. 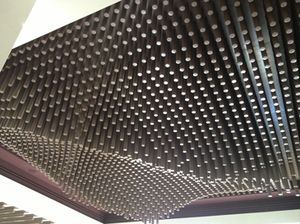 Having got it all assembled, flat on the ground, Hosei Professors Naomi Ando and Matsuro Sasaki, seen in the photo, say that, using ten elevator towers, the entire work can be raised in the desert in under four days.  We shall see, and meanwhile we wait.  The ceiling of the lobby of Park Hyatt Abu Dhabi is another sculpture, with a few thousand pipes coming down at different angles – the interior designer of this modernist hotel is Wilson and Associates, who made their name with the animal prints in Sun City in South Africa. 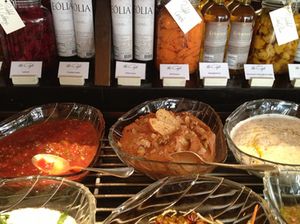 Colour in its Le Café buffet..

The entire Park Hyatt Abu Dhabi lobby, on two levels, is a sculpture. Six-foot high blackened silver desert roses sit in pale blue decorative pools. There is enough marble to support the combined budgets of Greece and Turkey, from which the stone here came from, and there are oodles of limestone. In case this all gives the impression of cold stone, by night the place is brightened up with hundreds of candles. Luxury travel trip: if a design is not empathetic by day, check it out again once the sun goes down. 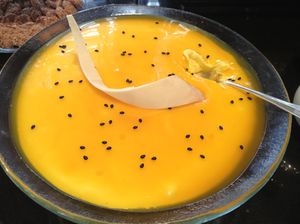 And, while you, luxury traveller, are about it, check out the buffet in Le Café.  You walk in past a glass-walled tandoori kitchen where chefs in crisp white gear are busily working as if they are about to feed the entire squad of Manchester City (the football team actually owned by Abu Dhabi). In Le Café, dishes and displayed bottles of oils and marinated vegetables remind me how important products are. I am told that this hotel works with an organic hydroponic farm in Al Ain, also in the Emirate of Abu Dhabi, and you can go and visit – it is about 45 minutes’ drive.  The hotel can also take you fishing. 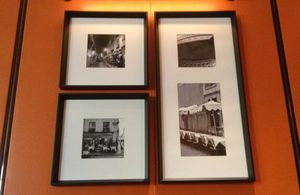 Before leaving this luxury hotel, which I loved so much when I stayed on my last visit (this time it is just a quick ‘hello and goodbye’) I put my nose around the door of The Library.  This is Hermès heaven.  The walls are Hermès-orange leather, and the bonbons and chocolates on the counter are tied in Hermès-orange ribbon. The hotel has two house champagnes, by the way, one of which is that orange label, Veuve Clicquot – which is part of Bernard Arnault’s LVMH stable and it is he, coincidentally, who is determined one day to own Hermès.