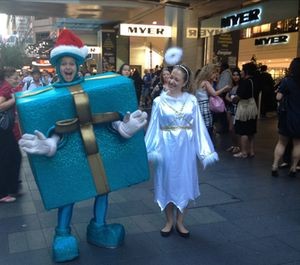 Christmas seems to come earlier and earlier, wherever you are in the world. The actual day, December 25th, starts first in the Pacific, then New Zealand and then Australia, where one keen enthusiast in Sydney here dresses up as Father Christmas does Tiffany.  But what the gal means is that the celebration of Christmas seems to start at least a day before it did last year.

Crumbs, one of my German publishing friends is giving up from two days ago, December 18th, 2015, to January 15th, 2016.  At this rate one wonders why she publishes at all since, by building in her long summer break as well, she is certainly now under-50 percent of the time at work.  Is this what you call work-life balance?

This is certainly a major consideration for all those running luxury hotels.  If they work their employees too hard they will, in today’s world, move somewhere else. Keep them working by motivation and empowerment, and respect and money. Give’em a Christmas party, too.  Bea Tollman, boss of Red Carnation, flies 13 employees from each of her hotels, including from Palm Beach and South Africa, in to London for a week-long Christmas bonanza, with a black tie gala and awards. Ritz-Carlton Millenia Singapore staff put on an annual Christmas show which requires three months’ practice – it is so professional that the hotel’s owners will not miss it.

This year I am seeing Christmas trees formed of teddy bears, Conrad Centennial Singapore; discarded oyster shells, The Langham, Auckland; gold Burberry umbrellas, Claridge’s, London, and so on. Luxury hotels are becoming increasingly adventurous and imaginative in their cause to stand out, and in many cases give something back. The Millenium Hilton in Seoul, for instance, always has a Lufthansa-sponsored electric train running round its tree, and other companies similar sponsor decorations, the income all going to charity. Christmas is a time for everyone – but just do not make its duration so stretched out.