Mandarin Oriental Hotel Group’s latest FAN advertisement is this brilliant collage of shoemaker Christian Louboutin. I love the way photographer Mary McCartney, daughter of Sir Paul, has very cleverly surrounded him by lasts (moulds) but the only hint of the distinctive Louboutin Chinese-red soles is the weeniest indication that his own trainers have red soles.

This ad is so compelling it takes my prize for the best current hard-print hotel ad.  The concept of the FANS, who also include Harry Connick Jr, Hélène Grimaud and I.M. Pei, is headed by Jill Kluge, who is VP Brand Communication for the luxury hotels in the Mandarin Oriental Hotel Group.

I love my own Louboutin shoes, though their heels are only three inches. Harry Potter star Emma Watson wears six-inches heels, not me.  Interestingly, on August 18th, 2011, it was announced Christian Louboutin’s request for an injunction to stop sales of red-soled shoes made by Yves Saint Laurent had been denied by the judge.  So what?  Christian, we love you nonetheless. 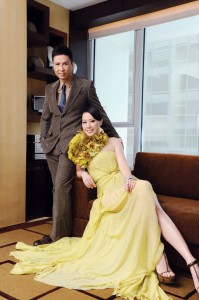 The Mandarin Oriental Hotel Group has such lovely hotels.  One of its most young-at-heart is Landmark Mandarin Oriental, Hong Kong, which is where I actually met Harry Connick Jr, at a dinner – in a decorated yoga studio – hosted by GM Tony Costa (the other guests included Raphael le Masne de Chermont, Chairman of Shanghai Tang, and his wife Marie, Travel Editor of Baccarat).

The 114-room ultra-modern hotel is integral with the Landmark mixed-use centre in Central, Hong Kong, so you can walk through to great retrial, including Lane Crawford. I last stayed in room 1314, a freeform room with central round bathtub.

I loved The Oriental Spa, also a favourite of Hong Kong’s top martial artist and action star (he is a Wing Chun specialist), Donnie Yen.  He and his wife Cissy Wang say they could spend hours in the spa (who does not enjoy being pampered?).