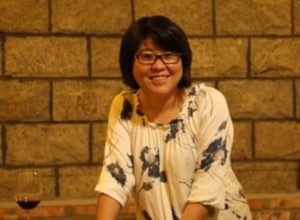 Wine in China used to be a bit of an anomaly but now, in luxury hotels at least, you can get a good array of foreign labels – and Chinese wines, too. Four Seasons Hotel Shanghai at Pudong has one of the most talented home-grown sommeliers, Ying Guo (photo above). Her family has long been in the drinks business and she has the most amazing credentials. In 2011 she was best Chinese sommelier for French wine, in 2012 she was China’s sommeliers’ champion, and in 2013 she was sommelier of the year. She was filling the gal in on Pretty Pony, and its winemaker Wang Fang, generally known as Crazy Fang. 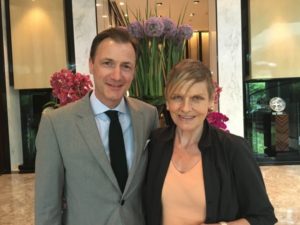 Crazy Fang won the 2015 Best Chinese Red Trophy, which Jancis Robinson NW said, after tasting 54 entrants, was by far the best. Her Kanaan Winery is in Ningxia’s golden region of Helan Mountains – she herself created the winery in 2011 when she returned home after a decade of living abroad. Good for her – I love such entrepreneurial stories. At Four Seasons Hotel Shanghai at Pudong, GM Rainer Stampfer was talking, also, about the rise of young women in China: more and more of the 200-room hotel’s guests are female, either on business or coming, perhaps with groups of friends, for staycations or other holidays. 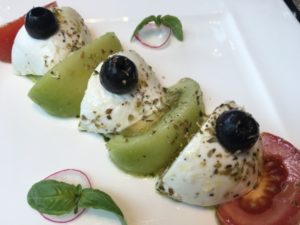 He is going travelling himself, soon. He has been elevated to President Asia of the Four Seasons brand. Whereas now, as RVP, he oversees six hotels – with Four Seasons Jakarta adding to that tally when it opens next Monday June 20th, 2016. Rainer Stampfer is moving to Singapore, to head a total of 23 open properties, from Mumbai to Bora Bora. He will be travelling pretty well non-stop. This seemed like a Last Lunch, therefore (when will I catch up with him again?). In the Shanghai hotel’s lovely indoor-out Camelia restaurant, chef Nicola Frizzale came rushing out to suggest, and then retreated to prepare, our lunch. 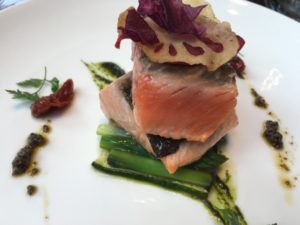 Rainer Stampfer knows that in his new role and in today’s demanding frenetic pace, healthy lifestyle is increasingly important. What is better than the right products, cooked in the right way? But, says this superb hotelier who has also been heading spas for Four Seasons’ luxury hotels and resorts throughout Asia Pacific, it must not be gimmicky.