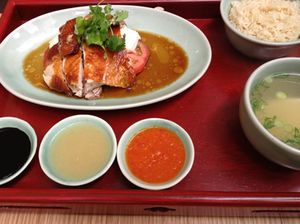 Chicken, not yet paired with its rice

The gal has written before about chicken and rice, so often associated with Hainan but in fact found in all Chinese-associated areas around south-east Asia.  Having got off the Eastern&Oriental train at Kuala Lumpur, that is where GirlAhead now finds herself, and of course chicken and rice featured on the first menu available. JP teres, at Grand Hyatt Kuala Lumpur, is somewhat like Straits Kitchen in the Grand Hyatt Singapore.  Both restaurants are ground floor, and offering local comfort food to local comfort-food seekers.  Here, chicken is available either roast or boiled. 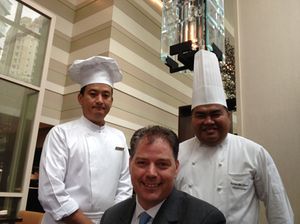 JP teres chefs and their boss

Much better roast, says Robert Dallimore, the Melbourne-born GM of this 412-room hotel, which opened August 2012.  He says the roast version has more flavour, and he called over his top local chef, Azman Ahmade, here on the right of the photo (with his assistant, Tony Sam Wing Chai).  The restaurant is so popular that it flows over to the terrace outside, and if you want to be private there is an additional room upstairs.  Since the hotel is right next to the main convention centre a lot of people actually staying here do want to be private, and among those who hosted a meal in that upper room is Melinda Gates, here for a Foundation charity do. 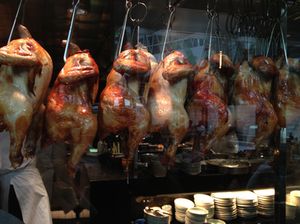 Chickens at the ready

Perhaps she too enjoyed the chicken and rice. It is a little disconcerting to see the ingredients hanging up by their necks but who cares, the results taste outstanding. Just as many multi-themed restaurants can trace their DNA back to Mezza9 in the Grand Hyatt Singapore, so Chinese comfort-food restaurants are descended, at least in the Hyatt family, from Made In China in the Grand Hyatt Beijing.  When we first ate there we were astounded to hear how they found a street hawker who main talent was sticking toothpicks in (dead) ducks’ necks to keep their wind-pipes open the correct amount during subsequent cooking. 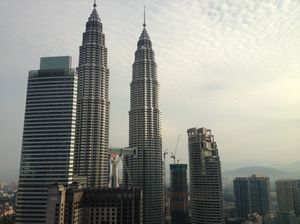 Suite 3509 at this hotel, by the way, is quite something. It comes with an office so I sit and work and swing round to my left – yes, this is a proper Herman Miller chair, the kind of desk chair that should be absolutely de rigueur in all luxury hotels – and look at the Twin Towers, also known as the Petronas Towers. Built on the site of the former Kuala Lumpur race course, they cost US$1.6 billion and rise to a height of 1,483 feet. They were designed by the Argentinian César Pelli, who is also, apparently, going to turn two current holes-in-the-ground to the right of the Towers, as I look at them, into two more luxury hotels. 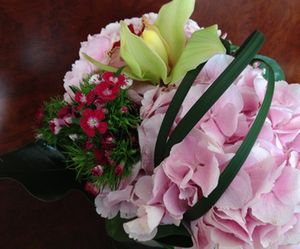 Flowers on the table

No, Kuala Lumpur probably has no need for yet more luxury hotels but that has not stopped developers in the past and it never will. Think Baku… Fortunately I am assured that the running circuit that goes round a garden in front of the Towers is not going to be touched (well, it has car-parking underneath so no-one can dig down).  Back to this lovely Hyatt. It has two floors of royal suites, specially for visiting dignitaries and the owners, from Brunei.  It also has an amazing TrueFitt & Hill grooming salon, brought from London by a talented entrepreneur by the name of Antoine Bakhache who also has the Christofle concession for Malaysia.  I admire the grooming salon’s traditional carved panelling, and meet a young Iranian barber. Back in my home, I admire the view, and the flowers… 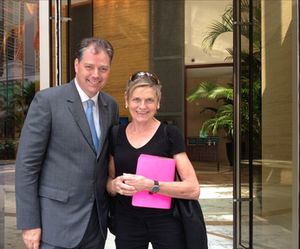 Staying here right now are Andy and Jenny Price, who are also addicts of luxury hotels.   Andy is a child psychiatrist who has diverted into running informal travel club meetings for senior (as in well-heeled rather than old-age) road warriors who want to network. Hence driven2travel.co.uk, which has got into bed, somewhat informally, with Hyatt, hence the fact they are staying here. Robert Dallimore introduces us, we talk travel and, oh gollee, it is time to go…