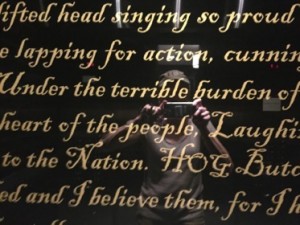 Chicago poem on an elevator wall

Which other luxury hotel has its elevator cabin walls as the heart of its design theme? Here at the five month-old Loews Chicago Hotel, lines are from Carl Sandburg’s 1916 Chicago poems: ‘ Hog Butcher for the World; Tool Maker, Stacker of Wheat; Player with Railroads and the Nation’s Freight Handler; Stormy, husky, brawling; City of the Big Shoulders….’, republished in a 2012 edition. These lines and more, in the four elevators of the 400-room hotel, inspired designers Simeone Deary (yes, the same as the magical transformers of InterContinental Chicago, only three blocks away). There are wood blocks based on the city’s skyscraper skylines high one wall of the two-floor lobby, which also has a 12 by 12 foot screen constantly evolving with action videos of actual guests in Loews‘ various hotels. 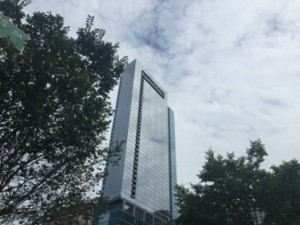 This is a hotel that believes in letting its customers spread the word. One father of a small child featured in one home video was so pleased to see her momentary fame he pushed the video to viral. Before opening the hotel, the sales and marketing wiz, Erik Grazetti, ‘took over’ a pair of Starbuck’s. For two hours, all customers found their orders were paid for by Loews, which resulted in instant delighted social media posts as well as others rushing round, quick, for a free latte, which came in a Loews wrapping band (and if there was a star on the reverse, you might get a free room). Erik Grazetti also word-wrapped four of Chicago’s open-topped tour buses. ‘A legendary city has some great new stories’ – namely a 52-floor high sculpture of a hotel. 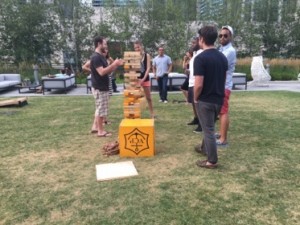 Jenga on a Streeterville lawn atop the ballrooms

He believes in story-telling, does our Erik, and there are masses of tales here. I was fascinated that they had over 11,000 job applicants, though they could only hire 280. Some of them, summer-long, run the Streeterville eaterainment space. Atop the enormous ballrooms is an outdoor area bigger than a football field. Part of this is a seated bistro, the rest is a garden, for lounging, and playing. Locals flock to play boules/pétanque, or jenga (put one more of 54 wood blocks on the shape without it falling down – a game of physical and mental skill created by Leslie Scott in the early 1970s). Already 15 business types live permanently at the hotel, by the way, although they may go home at weekends – like me they must appreciate the 24/7 gym, where I found the Matrix equipment easy to operate, with some near-decent television channels (one again I had a dawn start and my 5.30 breakfast was faultless, despite the meal not really beginning until six, though service does run all night). Sadly, I did not have time to take in a Dive-In Movie, shown at one end of the indoor pool.

What must not be missed is this luxury hotel’s main restaurant, Rural Society, named for a generations-old fraternity of Argentinian cattle people. The interior really looks like a Buenos Aires bar, and there is a 12-foot long open grill, even used for beetroot-in-the-embers. Ecuadorian-Chicago chef Jose Garces is such a flavour of the month he will be opening on Norwegian Cruise Line soon (here, this is his second Chicago restaurant). Obviously I wanted to try Remolachas, that ember-roasted beet, and my 15-ounce Certified Black Angus entraña, skirt, was unrolled, and carved on a wood plank at table. The Argentinian wines, Piero Incisa’s Chacra Pinot Noir Barda Patagonia and Santiago Achaval’s Achaval-Ferrer Cabernet Sauvignon 2012 Mendoza, were described in great detail by our server – who turned out to be Indian. As I left at 9.30 the last table to be filled arrived, namely nine dressed-to-the-nines young ladies, who seemed to prefer Martinis with their big hunks of beef.