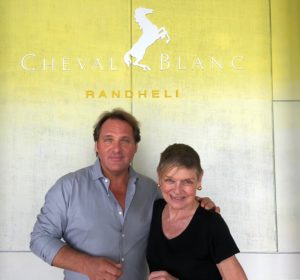 It is time to talk luxury, real luxury, through the eyes of one man, Renato Chizzola, GM of Le Cheval Blanc Randheli Island, Maldives – and in charge of LVMH’s Le Cheval Blanc brand for Middle East and eastward to the Pacific. He learned luxury, he says, at an early age, working in a restaurant when he was only 12, back home in Salzburg; later he learned oh so much at Hotel Sacher in Vienna. And then he coped with all the super-wealthy on The World of Residensea, and now, here in the Maldives, he has oligarchs worth $13 billion or so, according to Forbes, mooring a Philippe Starck-designed super-yacht conveniently near to land so, says the gal, they can pop ashore for a spell in the spa or perhaps some of the world’s best French foie gras followed by Kagoshima ribeye. 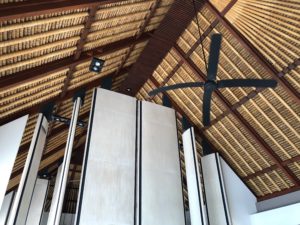 Screens, and the cathedral roof of villa 23

Those who stay here in one of the 45 villas, all designed by Jean-Michel Gathy, are in for a treat. The cathedral ceiling soars up, and two sets of vertically-rotating screens can divide the entire 80-foot length into three separate rooms, living room, bedroom and a large bathing area where luxury includes five different types of bathsalts – and Garnier-Thiebaut towels, all with the Cheval Blanc horse-head logo of course, that really do dry you. Luxury is also having a soft padded mat, taupe to match bedlinens and leather covers for drinking water and the ice bucket, a mat that is put on a long shelf to protect both it and my wheelie, which conveniently is Rimowa, now 80% owned by LVMH. 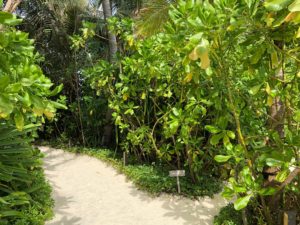 Luxury always wants something new, says Renato Chizzola, who in the last couple of weeks has added a pétangue court and a flower garden to the estate. On the food side, additions include a stunning outdoor teppenyaki table, C-shaped and hosting up to 12. The $185++ set menu that night was salted edamame, hamachi sashimi, foie gras with mixed mushroom and miso mirin, local lobster with spring onions, carrots, coriander, mayo, crispy leeks – and then garlic-topped cubes of that ribeye with garlic fried rice, finishing with coconut mochi ice cream. Renato Chizzola, knowing that luxury includes knowing, where possible, exactly what your guest likes, had already chosen Chambolle-Musigny Premier Cru Les Charmes 2011 Dme Christian Clergel. 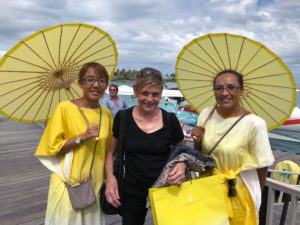 On the way back he drove me, in one of the new retro-look taupe buggies, to see the cabanas that have been added to the main pool. But my pool was addictive, right outside the full-wall windows of my villa. The temperature was perfect, the privacy complete. Having breakfasted off Ferme de Peuplier yoghurt and magnificent home-made wholewheat toast, I pedalled over to the Technogym on one of my two city bikes (luxury is the taupe fabric ‘shower caps’ covering their metal baskets). Actually luxury is the word that justifiably comes to mind frequently at this hotel – next, says Renato Chizzola, will be a full-sized soccer field (he already has two tennis courts, plus masses of boats for diving and snorkelling, and one of TMA’s Sea-Otter seaplanes is branded for Cheval Blanc. Luxury, as he says again, is giving more than expected. Last Christmas, when he had, as usual, 50% repeats, he made some of the buggies into a Santa train for the kids, all of whom, on New Year’s Eve, carried their national flag, from Australia through to Ukraine, to join him on stage for an international salute as the clock chimed midnight. NOW SEE MY ARRIVAL, AND A TOUR OF VILLA 23