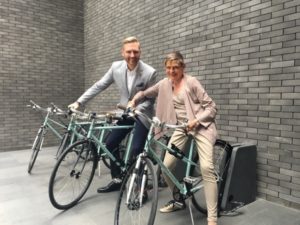 The Temple House is one compelling reason that the gal diverted to Chengdu – in under two years since opening, the 100-room beauty has become Tripadvisor’s 2017 top hotel in China for service, and the accolades never stop. Look at one day’s Tripadvisor postings and the all five-star assessments include: ‘they have it all’, ‘a wonderful combination of very minimal modern design with unexpected touches of Chinese elements’, and ‘high luxury that somehow manages to stay accessible’. OK, first the setting. An ancient temple, which today houses a gallery for pop-ups of modern Chengdu art, and also a 24/7 library of over 2,000 hardbacks from Philip Blackwell’s The Ultimate Library, in England, has been extended to an outside hilly garden, here all grass although it is based on tea plantations, and an 11-floor L-shaped hotel block. Below the garden, cut-outs give light to a lower level that includes an Olympic sized indoor pool and the gym – from which you can look up to daylight (top photo, above). Many of the new walls, as to the left here, are formed of traditional Chinese bricks. 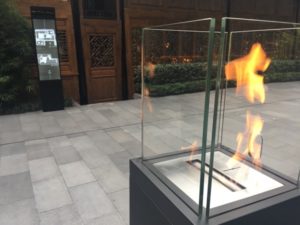 The designer inside and out is Dan Shuttleworth of Make, and he has obviously worked minutely closely with Swire Hotel’s Brian Williams and Dean Winter. I love the Ecosmart fire plinths that light and warm the garden – and I love looking across the garden and its hills to buildings that include a café, which has a really admirable herb garden outside, a project initiated by the extremely creative GM, Kurt Macher. See, below left, how there are sculpture-shapes in the garden that actually have inset video screens: this is an entire ambience of continual surprise. Come on a Saturday and you might coincide with weekly yoga, on the roof of the Italian restaurant, which is actually lower, below-ground, level – a wedding was taking place there the afternoon I arrived. As of June 3rd, 2017, Saturday is also European picnic day: you are loaned blankets to spread out on the grass, all the better to open the hamper filled with goodies from chef Joshua Nudd. 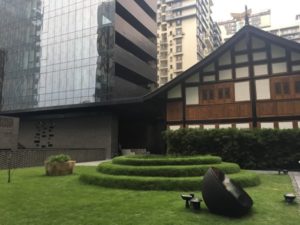 Kurt and I ate Italian that night, doing the simple thing of rucola salad with sun-dried tomatoes followed by oven-baked Spring chicken with truffle mash that brought back lifetime memories of the Spring chicken at the eternally youthful Prezza at the Fairmont-Swissôtel complex in Singapore. Actually I predict, now, that Temple House will quickly become immortal, just as its elder siblings, Opposite House in Beijing and Upper House in Hong Kong, are (memo to Brian Williams, please let us have some more Houses soon). I love the way that this House is integral with the amazing acres of designer shops and teahouses, all in traditional tiled houses, immediately around. There is, admittedly, one exception: surrounded by Gucci, Hermès, Marimekko and Zara and the like, all in those tile-roofed buildings, is one white-and-glass box, Apple Studio. 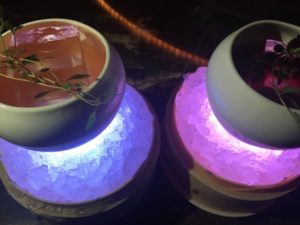 Yes, this is style, throughout – the room service menu suggests one gin, Hendrick’s, and one vodka, Ketel One, to give a single example. There is no space to describe rooms, here – see the video below – but it is essential to talk about the super staff, one of the key reasons for this luxury hotel’s deserved success. Kurt Macher has painted back-of-house areas in soft icecream colours, and some walls are galleries for employees’ handprints while others hold framed photos of all 360 team members – if and when any dare to move on (and, typically, China’s hotels have some of the highest staff turnover rates in the entire industry globally), they are given their photo as a leaving present. There are boards to sign up for car-sharing, there are listings of departmental initiatives. Kurt Macher personally leads stretch warm-up physical jerks at team members’ town hall meetings, and in the next breath he offers to take a guest for a local tour on one of the gorgeous turquoise bikes, Natooke bespoke for the hotel, and so on, and so forth. What an extraordinary hotel this is. NOW SEE SUITE 1005, BELOW: