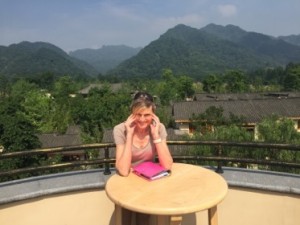 This is real! Background of Qing Cheng Mountain

China has, as of June 15th, 2015, one of the world’s most exciting ‘natural luxury’ resorts. On that day the first fortunate guests started arriving at Six Senses Qing Cheng Mountain, at the foot of the 1,300 metres a.s.l. Qing Cheng (ching-chong) Mountain, an hour’s drive from Chengdu, capital of China’s Sichuan Province. As luck would have it, the gal had a preview. Look at the view, taken from the 360-degree-panorama rooftop cocktail venue above the main resort complex, with the stunning mountain behind. 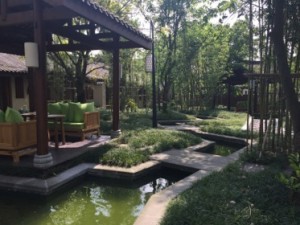 One of the many characterful outdoor spots

The resort occupies a total of 62 acres, now meticulously landscaped with mature bamboos and other greenery. Master-planners Arup put in canals and rushing waterfalls, and a massive working vegetable garden. There are lots of outdoor seating areas, as shown, next to meeting rooms. There are also, dotted around as if in a village, a total of 113 rooms – mostly suites, either up or down in two floor buildings in local style, cream plaster with lots of local nanmu wood, and tiled roofs. Upstairs suites are reached by upper level outdoor walkways reached via 23 wood steps. 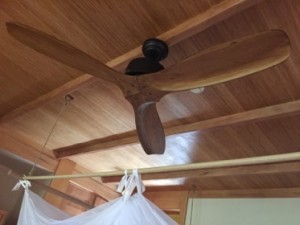 Looking up at my ceiling…

Downstairs, suites like mine (251) have private gardens, about 20 by 15 feet and filled with lush greenery. The suite’s interior was entirely nanmu wood, with cleverly locally-crafted furniture. The bed, with Six Senses’ signature mosquito net hanging from the ceiling, is below a three-blade fan that is in itself a work of art. I had faultless WiFi. A brand new Giant bike, with helmet, meant I could cycle round and round the estate and admire its many unusual features – I also saw one of the multi-bedroom open-courtyard villas, with jacuzzi, that will be really popular for multigenerational holidays. 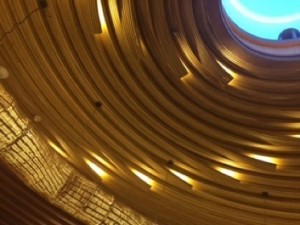 .. and the fascinating open-topped bamboo ceiling of the Thai restaurant

Of course there is Chinese dining, at 28 Zodiac. Try smoothies or teas at The Square (which also has a library and boutique), and Sala Thai restaurant, a circular shape dominated by two things. The open kitchen, also circular, takes up much of the interior space – you can also sit outside, as Sichuan people apparently love to do, even wrapped up in the admittedly-mild winters. Also, look up at the stunning bamboo ceiling, another work of art. There are so many natural features in this stunning place. Lots of big lampshades, for instance, are made of fine strips of bamboo interwoven and turned almost into balls of knitting wool. 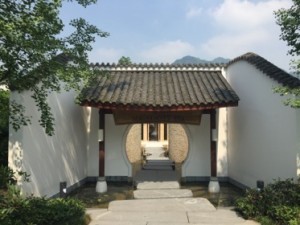 The spa will be open by September, and it is gorgeous. Reach it past the outdoor pool, which has eight solid-wall cabanas with entrances like the one shown. Go past this pool, and through the timber building that houses the heated indoor pool, 100-feet in length with a children’s pool at one end. Finally, go through the entrance shown, and walk over 13 uniquely-shaped stones set in a decorative pool to reach the circular building that is spa reception. There are eight treatment rooms, and two doubles, all with curving white walls with imprints of bamboo trunks – look out at a full-height fall of water over pebble-set walls as you are massaged, or whatever. 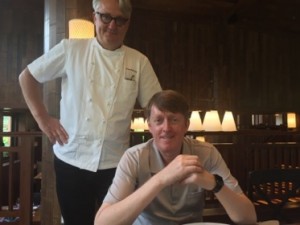 A close-knit team of four foreigners, to be joined by a Thai chef, is leading the 350 passionate young locals to make this luxury hotel work. GM is Canadian Michael Murphy – wearing his brand-new Apple Watch (ordering online in China is just so easy, he says). Swede Connie Andersson has been busily sourcing food suppliers all over China, and leading his culinary team, especially in Farm 2 Fork, the all-day restaurant with a definite rustic look. There are also two fluent Mandarin speakers, Brett Model from New York and Olaf Kreutz from Berlin, both of whom, also Sino-addicts, came for a visit, and stayed. I just wish I could have stayed, too.