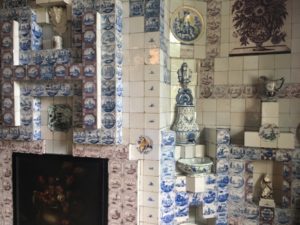 Each room was decorated by Victor Hugo

The gal was fascinated by Guernsey, especially because of David Bellos’ The Novel of the Century: The Extraordinary Adventure of Les Miserables, published by Penguin 2017. Victor Hugo, the French author of The Hunchback of Notre Dame, ‘Les Mis’ and other classics lived on this 25 square-mile island between 1856 and 1870, and there is a striking statue of him – above – in the gardens in front of Guernsey Art Museum. It is also strongly recommended that visitors with an interest in literature or history leave their luxury hotel or BandB to take the hour-long tour of his home, Hauteville House, at 38 Hauteville in the island’s capital, St Peter Port. After his death his family gave it to the City of Paris. 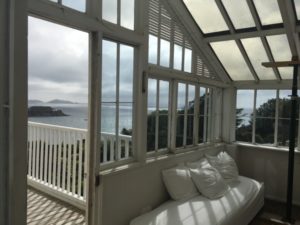 Fortunately its views are magnificent

Paris still owns it – I wonder if the Mayor knows, and whether the new President knows?  Anyway, someone there has made the decision to close the entire house for the 2018 season to put in new windows and carpets. Hurry, therefore, before it finishes its season end of September 2017. Thursday through Tuesday, it is open from ten a.m., with tours in English or French. The house is totally extraordinary. Victor Hugo personally designed all the rooms, which start in near darkness at ground level and rise to the airiness of the four-floor eyrie. On all floors below there are thick carpets on floors, and walls and sometimes ceilings (which might alternatively be lined in china plates): heavy wood wall panels are fashioned from parts of mediaeval churches, with allegorical writings, and Victor Hugo’s initials tantalisingly semi-hidden among flowers, or on Delft tiles that form a three-dimensional wall in the dining room. 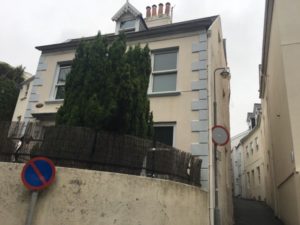 Victor Hugo’s house is indeed unique, and everyone should see it – once. Another must-do is simply to walk around the inner town of St Peter Port. Walk rather than drive: the photo on the left shows the entrance, from St Julian’s Avenue, to Les Canichers street. This part of the street is now barred not only to vehicles but bicycles, though I heard a lovely story, from someone who lives 300 yards west along Les Canichers where the street is double-width, of a friend coming for dinner who started driving along the narrow section shown – she did not dare reverse but had to hope for the best, which fortunately worked out. What else to do? Take buses. The island’s system is incredibly efficient, and such good value. Every ride, regardless of length, is £1. Being an intrepid traveller as well as having been brought up to mind every penny, let alone pound, I planned a peripheral island bus tour. 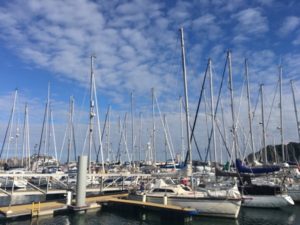 Service 91 goes clockwise and service 92 goes anticlockwise, making lots of stops enroute. Unfortunately I got on a 93 by mistake and did a delightfully peripatetic inland tour. No problem. said the driver. Get out here, by the Imperial Hotel, a lonely structure in the windswept southwest of the island, and 91 will be coming in 16 minutes. Exactly on time the 91 did arrive, and my original £1 ticket sufficed. After spending a total of one pound for nearly 2.5 hours’ sightseeing, passing amazing old forts and surfing schools and Specsavers’ headquarters, I was back at the marina, looking at real money. This is a high income island, as evidenced by houses that look as if they are painted every month, and by immaculate gardens – real estate is comparable to London prices, I was told. Fortunately Guernsey’s premier luxury hotel, Old Government House (OGH) has three houses for its staff, which might be one of many reasons why they appear so happy, as I was to find out.