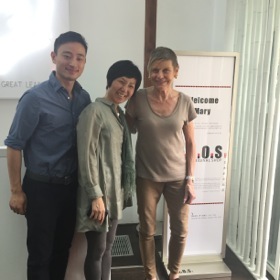 Question, which luxury hotel, anywhere in the world, encompasses and wraps its arms around a one-time home of someone who changed the geopolitical destiny of the 20th century? OK, says the gal, you could say London’s Admiralty Arch and Churchill, but that hotel has some time to go before opening. You could say Johannesburg’s Saxon and Nelson Mandela. You could also say Shanghai’s Jing’an Shangri-La West Shanghai. There, behind the stunning hotel, is the 1902-vintage, two-floor wood home where Mao Zedong lived for three months in 1920. Now The House of Mao is partly a stunning minimalist art gallery, run by the charming Julia Mao. 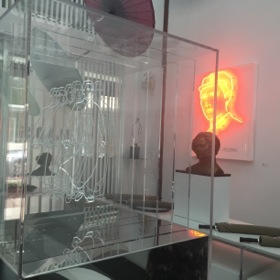 Exciting artworks in the Mao shop

Another part of The House of Mao is a shop, with everything revolving around the great leader. I love not only the neon outline but also the vertical slats, each engraved with a Mao outline, that light in turn to show him ‘walking’. Actually the entire 508-room Jing’an Shangri-La West Shanghai is art-inspired. I am in corner suite 5303, and in the bedroom I have what is, to me at least, a unique painting, about three feet by 2.5 feet, showing a chest of drawers with little song birds peeking out of the drawers. It must mean something but, whatever, I remember it.  Each room has a different ceramic pot outside its door, so you can remember your pot instead of your number. All bathrooms have not only electric towel rails but heated floors. My suite has additions: someone has put, in the salon, an elliptical machine and a Pilates ball, yes really. 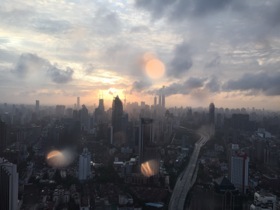 Sunrise, through raindrops, from suite 5303

I will also remember the sunrise. It poured with rain last night, and this morning there are still raindrops on the big windows of the 59-floor building, designed by architects Kohn Pedersen Fox KPF. Down there somewhere, were it not for the raindrops, I could see the actual golden Jing’an temple, which gives this area of Puxi its name. The temple goes back to the Wu Kingdom, about 247 AD, but it has been moved, and rebuilt, and during the Cultural Revolution they made plastics there. But that was yesterday. 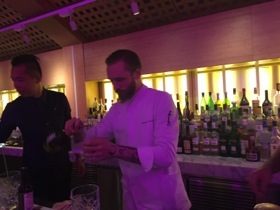 Today is the bustling Jing’an area, with outstanding retail and restaurants, and this gorgeous 508-room hotel. I love its Summer Palace restaurant, designed by André Fu. I love its separate, two-floor Calypso restaurant that adapts to a memorable venue for ILTM’s official party. Blow the rain. People networked with friends from all over, and met newcomers, and caught up on the global buzz, centred here in Shanghai. Hotel boss Kieran Twomey, a canny operator if ever there was one, worked with China World Hotel Beijing to fly in New York’s top mixologist, former US marine Steve Schneider, star of Employees Only. For one night, he mixed magic here: the rest of the week he was performing in Beijing. 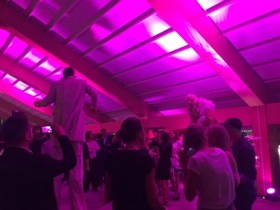 Stiltwalkers and contortionists at the brilliant party Kieran Twomey organised

There was more entertainment, in the form of contortionists and stiltwalkers, and fabulous food from the hotel’s own restaurants – I particularly loved nuggets of suckling pig with divine crackling (and no, dear readers, I did not lose even a chip of tooth). All those there were invited to record the evening on #hashtag party moments, perhaps to win a two-night Executive Suite stay. I also picked up the fact that June 28th sees a vertical marathon, right to the top of the building, in aid of the Shanghai Children’s Medical Centre (I have also been invited, via my keycard’s QR barcode, to rate my stay). Really, this luxury hotel is too much.