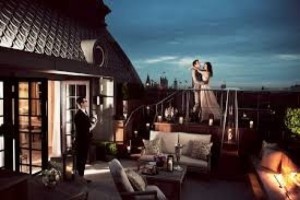 Romantic elegance on a suite’s terrace

Nothing beats really good, and simple, Italian food. The frito misto, above, with a green salad, is the perfect lunch dish, says the gal. If you agree, head to another unique luxury hotel, Corinthia London, and its Massimo restaurant. OK, you might say what is unique about this? Well, take the hotel, which is shaped like a narrow wedge of cheese, its sides formed of Northumberland Avenue and Whitehall Place, and its point facing across one road, Embankment, to the Thames – yes, another hotel on London’s famous river, but eight miles or so west of the new London InterContinental O2 in North Greenwich. This hotel is Whitehall, through and through, and conveniently next to Embankment underground subway station. 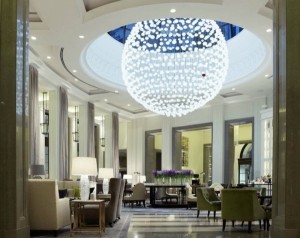 Meet under the lobby’s Full Moon

It has some amazingly romantic suites among its 294 rooms. The two-room, 4,800 sq ft Lady Hamilton Suite, with an outdoor plunge pool, looks directly, eye-to-eye, at the statue of Nelson in Trafalgar Square, 100 yards to the north of the hotel. It is full of history, this place. The building, then the Metropole Hotel, opened in 1885, commissioned by a Mr Gordon, and in 1896 the first of what has become the annual London to Brighton veteran car rally started here (Mr Gordon also had a Metropole hotel in Brighton).   It was taken over by the Ministry of Defence from 1936 to 2006, and it was re-opened, in its present guise, in 2011. Its lobby has become the key meeting place, in this immediate area – meet under the Full Moon, perhaps: this is a 13-foot diameter ‘crystal ball’, weighing two tonnes, formed of 1,110 white and one single red inner-lit LCD balls, designed by Baccarat designer Chafic Gasmi. 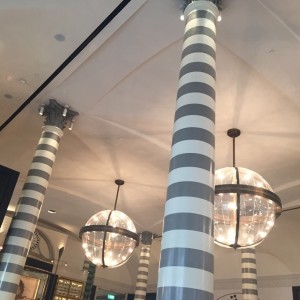 Back to Massimo‘s, a room designed by David Collins which makes the most of the original two rows of five, ceiling-high, striped columns, conveniently with Corinthian tops. Here chef Andrea Cirino works his culinary magic. Ideally, I suggest, have a drink first in the adjacent Aperitivo Bar, but this time I was in a bit of a hurry (when am I NOT?).  There might be one or two aperitifs taken when DEPARTURES is here in a few weeks’ time. The magazine‘s Editor-in-Chief, Richard David Storey, is leading a small group to London, April 14-18, 2016, and apparently there might just be a couple of places left: contact the hotel quick. The trip includes dinner in Massimo hosted by Corinthia‘s founding Chairman, the charming Alfred Pisani, and a performance at the Royal Opera House. 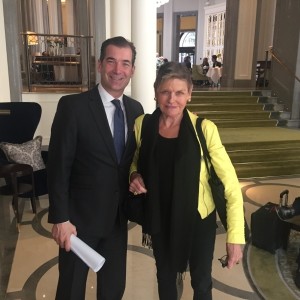 Tour the Royal Academy with its Artistic Director Tim Marlow, meet publisher Prosper Assouline, go through King Henry VIII‘s wine cellar, drink Laurent-Perrier, take a Thames boat trip, visit the Earl of March at Goodwood – how can you bear to stay home? Last time I stayed in this luxury hotel, by the way, I took part in an interactive theatrical thriller, its annual inhotel cultural offering: this year’s was opera and, says GM Thomas Fischer, who arrived August 2015, watch out for a forthcoming Technology In Residence event. Yes, Corinthia London is lifestyle of happenings, and, throughout, the quality of the product is superb – see the video below.