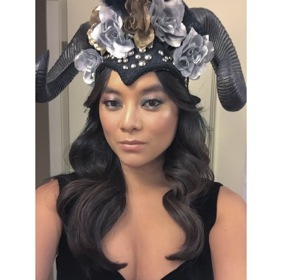 Last Friday, November 7th, 2015, designers Yabu Pushelberg – lifetime partners George Yabu and Glenn Pushelberg – were honoured at Canada’s Design Museum in their home town, Toronto. A magnificent fancy-dress Kismet party was thrown for that Design Exchange International DXI award, and among those who flew in specially was Lynne Bredfeldt. She went to town with her outfit (the hat was vintage, and she had her make-up done professionally). Everyone who comes into contact with the YP duo admires them, and had she known about the event and been somewhere closer than across a giant ocean, the gal would have rushed there too. 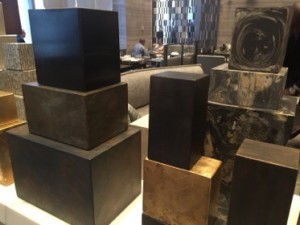 I absolutely love their work. There is always more than a hint of decadence meets Manhattan, with a few whirls and swirls, as seen at both Four Seasons Toronto and St Regis Bal Harbour Resort, where one of the lasting memories is a mirrored walkway leading to restaurants.   At Park Hyatt New York, the main function space, the Onyx Room, has walls 30 feet high that are entirely blocks of onyx, all back-lit. Bedroom minibars evoke age-old travelling trunks. In the comfortable airy lounge leading to The Back Room restaurant, there are blocks of different stone, as used throughout the hotel. Decorative playthings for those who would be eternally young, namely adults. And all around, sipping Martinis or a healthy Newman’s Own tomato juice, are Manhattan literati, en route to Carnegie Hall opposite, or perhaps just recovering from a retail spell at nearby Barney’s. 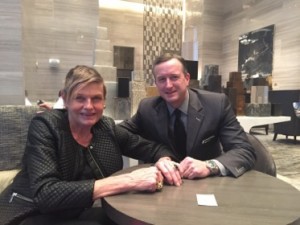 Mark Pardue, in grey to match many of those stone blocks, fitted right into the theatrical set. He is the newly-arrived GM of Park Hyatt New York, as well as area VP for luxury. He knows the brand well as he converted the venerable Stanhope into Park Hyatt before nipping across to the west coast to open the then-Park Hyatt Century City (now InterContinental Los Angeles). He moved here, to West 57th Street, from Grand Central Station, or at least the hotel on top of it, Donald Trump‘s Grand Hyatt New York. Why has The Donald not put his name on that one, one wonders? He probably does not own the air-space around it, as he does at Trump SoHo, downtown here in New York.   Mark Pardue looks remarkably fit. Does he too, like another top hotelier, work out at 4.30 every morning? No, he is a hockey coach. 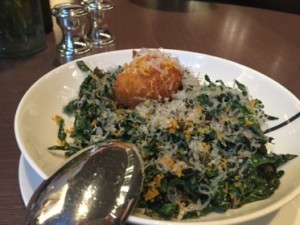 Park Hyatt New York is one of those luxury hotels that believes in offering scrumptious, tasty and healthy food. At The Back Room, a waiter with a hair-do that can only be described as minutely sculpted, kept on bringing out extras. I was lunching with the aforementioned Lynne Bredfeldt, who looks after branding and spreading the word of two favourite luxury hotels, this one, and Park Hyatt Chicago.  I had ordered a beetroot salad followed by tuna but somehow he also managed to bring a really healthy kale dish with poached egg, plus tagliatelle with fresh truffle. Did I say healthy? Perhaps forget that one. We were surrounded by Manhattan Ladies Who Lunch, and local business tycoons, without exception immaculately suited and tied, with hair that was in no way sculpted. This is a power place, and incredibly enjoyable.