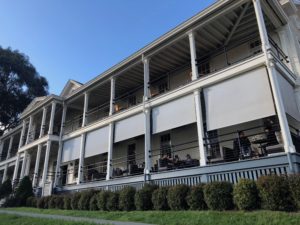 Developers know that historic buildings, be they post offices or schools or whatever, have an instant edge when it comes to the culture of a memorable hotel.  The gal had stayed in Singapore’s former military base, now Fort Canning hotel, but this was the first visit to Cavallo Point – The Lodge at the Golden Gate, a Preferred hotel on the north side of the Bridge.  Fort Baker barracks, set around a ten-acre horseshoe-shaped parade ground (‘cavallo’ is Italian  for ‘horse’), were built 1901 through to 1915, and they were in use until the Fort was decommissioned in 1972.  The 24 original buildings, in Colonial Revival style, are still there. 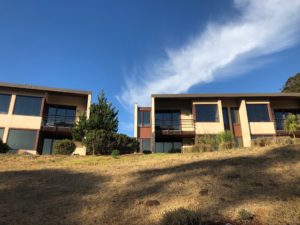 Building 547, for instance, is the hotel’s 24/7 Precor gym, building 1563 is a really serious Healing Arts Center and Spa, with outdoor heated pool and meditation areas, and 11 treatment rooms using such products as Luzern, NuFace and OM4. Daily yoga is offered in building #519, which looks from outside as if it were a church but in fact it was always a secular structure.  There are 68 ‘historic’ rooms in old buildings, some taking up entire houses, which are great for family or small-group buy-outs. The old, however, is complemented by 20th century two-floor blocks of bedrooms, so the hotel, which opened 2008, has a total of 142 bedrooms. 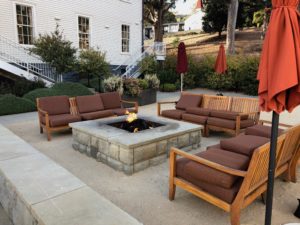 I was in room 1403, reached up 22 outside steps.  Whenever the fog, for which San Francisco is famous, allowed I had a great view of the Golden Gate Bridge – see the photo above. Designed by Brayton Hughes, the room was comfortable in an eco way, with organic bedding, controlled temperature, and filtered drinking water. When it was time, I walked five minutes down the hill to the outside fire pit next to the main parade ground’s peripheral road, Murray Circle. The fire pit is next to the dining block, and dinner here was really enjoyable.  Murray Circle restaurant is in several adjacent rooms, some curtained off to give private dining. I loved the dark-brown painted tin ceiling, colonial-look columns, and colonial-type table set up – I also loved the 2,000-label wine list, presented by wine director Anani Lawson.  He chose, for me, a glass of 2016 Bedrock Wine Co Old Vine Zinfandel. 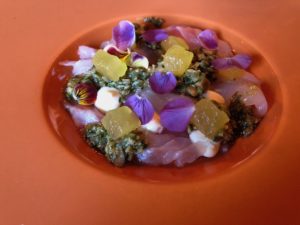 Kelsey Gummow, from management company Passport Resorts, which also has Post Ranch Inn at Big Sur, joined me for dinner – we were surrounded by Sausalito residents and other locals, and by the many business people who stay here during the week for executive thinktanks and retreats (at weekends, this turns into the ideal family leisure destination – kids love the Bay Area Discovery Museum five minutes away).  Monique Feybesse is dinner chef, and I had her hamachi crudo with pumpkin seed verde, compressed watermelon and Japanese aioli, and also her ember-grilled bavette with baby leeks.  We discussed many things, including Cavallo Point’s really outstanding Mercantile retail store, as good as top museum shops: it now sells online, via www.shopcavallopoint.com. Mercantile is run by Leigh Vogen, who on Thursday, October 18th hosts an early evening benefit in aid of breast cancer – the event, 5.30-8.30, includes skincare demonstrations and consultations, massages and much more, including shopping.  This really is a unique and unforgettable hotel. NOW SEE ROOM 1403