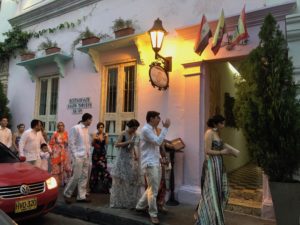 Cartagena, the town that someone who lives there describes as Marrakesh, for its vibes, blended with Seville, for history.  But neither of those place has the enchanting local people, and the continual happenings.  The gal was met at the airport, only ten minutes’ drive from the old walled city, by one of the industry’s most remarkable multi-skillers, a would-be marine biologist and, today, a skilled salsa teacher who happens to be chief butler of Sofitel Santa Clara.  This is, without doubt, Cartagena’s top luxury hotel: its average rate is more than twice its competitors.  The gal says it has the unique advantage, too, of being in the old city, where everything happens.  There may, for instance, be a wedding party forced, by the narrow roads, to walk from the cathedral, along Calles 35, 7, 8 and 38 to get to the this extraordinary luxury hotel. 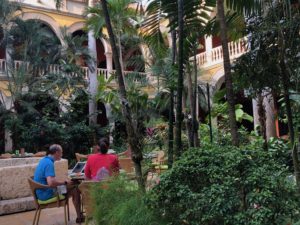 Why does it deserve this adjective?  When Richard Launay arrived as GM in 2000 he started what turned out to be a mammoth project. The hotel is strapped into the shell of a 17th century convent, and one of its two open-roofed cloister courtyards, in all 576 sq m, was abundantly filled with non-indigenous plant species.  It took at least four years before all those usurpers were gone. The work was done by hotel management and local garden maestro Pablo Maciá. Now the cloister is a sustainable picture-book of real greenery, native to Colombia – Royal palms, native orchids, Cartagena ferns, San Joaquin bunches, scented lipus, scented native wild orchids; in addition to Ginger, Eliotropo, Belle de Nuit, Ylang Ylang orange groves, Emperor Cane, centenary palm trees, Jasmine and Citronella, plus horsetail, Begonias and Ixora, and hummingbirds and other varieties of birds and tiny Coqui frog 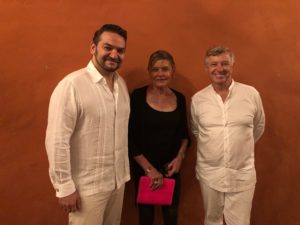 Those staying in the 160-room hotel often breakfast here, in the cloister garden, and at night it is a very special place – dine here and your servers are wearing chic white-collared black shirts, part of Bogota designer Lina Cantillo’s fashions for this hotel that also include many daytime white uniforms with discreet embroidery copied from deathbed regalia worn by the nuns whose home this was, from the 17th century through to 1970. Stay here because it IS the only significant hotel right in the old part of town, but also for its unique qualities.  Original stone-walled restaurant 1621, named for the convent’s foundation date, serves superb tableside-made ceviche and other memorable dishes. At breakfast, where you sit outside or in an adjacent air-conditioned room, you walk over a glass panel set into the stone floor that looks down into the ancient crypt.  Enjoy a spa treatment, which definitely needs prior reservations, and the Sisley-trained therapist is a skilled masseur so you, and your face or whatever, instantly feel oodles better.  Take a swim in the pool – see the image above – and, as you lap, remember this space was once a convent vegetable garden.  Yes, there are so many touchpoints here, many of them put in by Richard Launay (his disciples include former deputy David Kianni, now GM of sibling hotel, Hotel Sofitel Victoria Regina in Bogota). 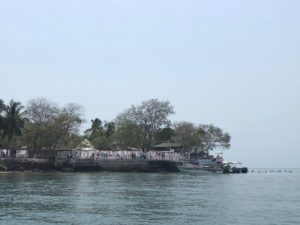 My suite, #511, had the best view down across the pool to the ocean – see the photo above. My time with the concierges was, without doubt, among the best ever.  Edson Arzuza, appointed for his IT skills, helped with a Microsoft Word challenge in a mere ten minutes.  His leader, Rudy Cuadro, took a whole morning to show me the famous Rosario Islands. This is where party-goers rush, by speedboat. Fifty minutes there, on day-time packages to allow them to land, and frolic in the waters, in noisy coves or, my favourite, quiet lagoons, and head home via another 50-minute choppy ride.  Oh there are so many memorable touchpoints here. This is a luxury hotel with an intriguing past, and an exciting future. AND NOW, A CORNUCOPIA OF VIDEOS, NAMELY ROOM 511, THEN BREAKFAST, THEN THE COLOMBIAN COFFEE LADY, ALL FOLLOWED BY THREE VIEWS ON ISLA GRANDE, AN OVERVIEW, A NICE QUIET PLACE AND, FOR THOSE WHO WANT TO BE RAUCOUS, ISLA GRANDE PARTY TIME