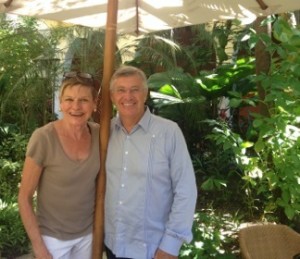 Richard Launay, who runs Cartagena’s top luxury hotel, Santa Clara (a Sofitel Legend property), is there to greet the gal as she arrives for an all-too-short return visit to this fascinating city. on Colombia’s Caribbean coast. Local architect José Alvaro Arias had the idea of converting an abandoned convent built 1617-1621 for Doña Catalina de Cabrera, who founded the Clarissan order (it later became a hospital). He brought in Accor as financial partner, and in 1949 work began on converting the building to a five-star hotel. Read about some of this, indeed, in the foreword to the fascinating Of Love and Other Demons by Nobel literary prizewinner Gabriel Garcia Marquez (Gabo), 1927-2014, who recounted, October 26th, 1949, being present when the crypt was being emptied. 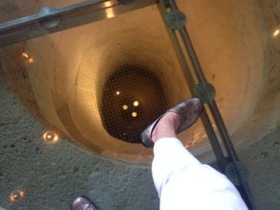 Standing on the glass panel in the breakfast room

The splendid 122-room hotel, designed by, and still 80 percent owned by, José Alvaro Arias opened in 1995, since when it has continued to add features that make it even more an essential part of the community. There are still many signs of its past. I put my foot on a glass panel in the floor of the El Claustro restaurant, once the convent bakery and kitchen. Look down, to a well below. The other restaurant, 1621 (for the convent opening), has original bare walls, a reminder that this was the nuns’ refectory. Whereas then they presumably ate their humble fare in silence, today diners enjoy French food with a Colombian twist, with a choice of over 250 wine labels. But this is not necessarily a place to put on weight. 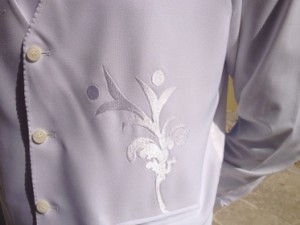 Detail of a uniform

As well as a 24/7 Lifefitness gym, there are big stone staircases offering 64 steep steps from ground to fifth-floor rooftop. I mentioned how Richard Launay’s DNA is one of incessant improvement. He has upgraded the eight-room Sisley spa significantly – it is world-class – and is bringing in nutritional food items, as suggested by Marisa Berenson, for Sofitel generally. Top Colombian stylist Lina Cantillo has designed fashion wear for the 320 employees, and she adapted embroideries shown on 17th century oil paintings of convent Mother Superiors. See, therefore, the embroidery on a butler’s waistcoat vest (doormen here, by the way, are also in all-white, with open wicker-work top hats). 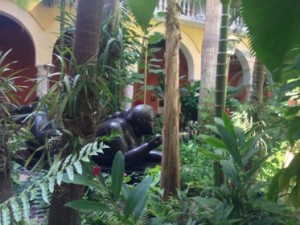 This luxury hotel now has a premium Botero Suite, named for Colombian sculptor Fernando Botero and designed by his daughter, Ina Botero, who is one of the many famous names who lives in Cartagena. There is a Botero sculpture, indeed, in the hotel’s commendably indigenous garden, which warrants yet another story…