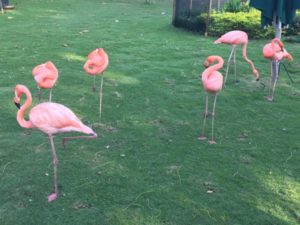 Flamingos near the ship..

The stunningly beautiful Seven Seas Mariner had a bit of a tough time getting into Cartagena de Indias – a storm out to sea was causing Captain Serena Melani to change the planned route. But, says the gal, the luxury hotel-at-sea arrived on time, and, at the dock, a vista of man-made cranes, as above, contrasted with the glorious crane-like flamingos, left, five minutes away, which strutted around completely oblivious of visiting humans. Cartagena, fifth largest city in Colombia, is a riot of colour, everywhere. 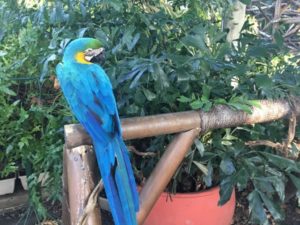 Blue and red parrots, right next to the flamingos, were untethered, and again heedless of visitors, and gosh what a noise they made, even louder than the appropriately-named howler monkeys we had seen earlier on the cruise. Seven Seas Mariner offers a great choice of completely-free tours at every port (though you can, if you want to spend extra, pay for even higher-cost tours). Today, not surprisingly, those who had never been to Cartagena before opted for city-tours, including a hop-on hop-off bus. 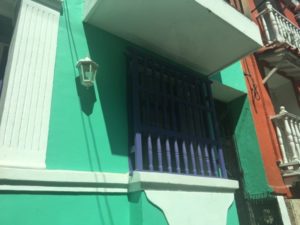 I adore Cartagena, named after Cartagena in Spain, in turn named after Carthage, near Tunis. The walled city here is a UNESCO World Heritage Site, designated thus in 1984, and many of the buildings in the old town date back to the 16th century (the oldest church is Convento de Santo Domingo, founded 1551). At some point the craze started for painting buildings in bold blocks of colour, which gives a lovely patchwork effect as you look along the narrow streets. Best way to see the city is actually to walk rather than be driven. Once again cars progress at snails’ pace. 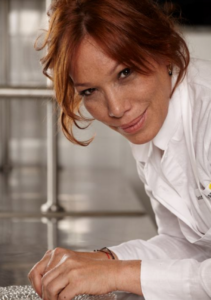 Cartagena is a great place for festivals, with January’s annual music and literary festivals, the latter based on the UK’s Hay-on-Wye gathering. There are, later in the year, film and beauty festivals. And it is renowned for its food, with its best-known culinarian being Leo, real name Leonor Espinosa De La Ossa. Born here, she graduated in Economics and Fine Arts and had a highly successful career in marketing and advertising in Bogota before switching to food – her sommelier is her daughter, Laura Hernandez Espinosa. Together, the pair run Leo Cocina y Cava, in Bogota – it is worth looking at Leo’s beautiful book Leo el Sabor Ancestral y Moderno (you use up hundreds of calories just holding it, so then head for one of Cartagena’s luxury hotels).