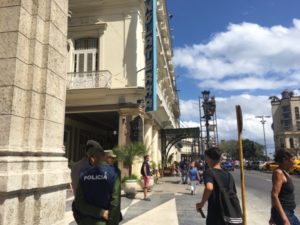 The gal had, let us be honest, come to Havana to do a bit of hotel research. Rumour has it that, frankly, luxury hotels and this part of Cuba are not compatible – the most popular tourist area of the country is probably the Varadero peninsula, where all-inclusives sit side by side with barely enough space between for snowbird guests, mostly from Canada, to breathe. Those snowbirds may well spend their winter months lazing on beaches, and eating and drinking, and so on. Culture-seekers, however, need Havana, for its sensational buildings, as above, and so much more. And there are fascinating hotels, even if they do not, as yet, offer luxury as we know it globally. Right now, for example, WiFi is not available in bedrooms. Hotels have routers in their lobbies. Buy a sim card, use it where you can, which means lobbies, and immediate environs outside hotels, are gathering places for people wanting to connect. 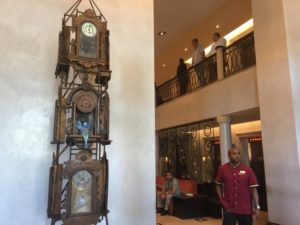 The city’s oldest still-operating hotel is the Inglaterra, next to Gran Teatro de La Habana, built 1875 and base, during the 1895 Spanish-Cuban War, of Winston Churchill, then a military reporter. Today it has 83 bedrooms, and a big terrace, ideal for sitting while picking up your messages – and it is rumoured to be joining Marriott’s Luxury Collection this December. I tried to get into its slightly-younger sister, the 1880-vintage, 96-room Hotel Saratoga, diagonally opposite Havana’s signature Capitol building, but the entire block was closed off, apparently because the King of Morocco had taken over this, and several other, hotels (he is renowned for travelling not only with an enormous entourage but even his own furniture). 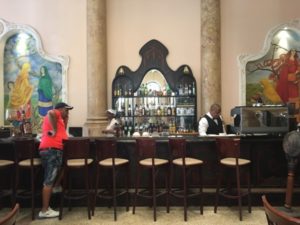 I just hope that His Majesty has brought his own staff with him, too. Look at recent reviews for Hotel Saratoga and as Denise from Newcastle wrote only two weeks ago ‘We were aware that hotels in Cuba charge five-star prices for two-star hotels but we weren’t prepared for the issues we confronted. This is the only poor review I’ve ever written. Having said that, the restaurant was very good’.   Honestly, once I started looking at reviews for all top hotels in Havana I realised that rumours are true. Service levels appear to be appalling. Even the Jewish-themed Hotel Raquel, which seemed on a short visit to be really friendly, let down all the TripAdvisor writers I researched (ordered cabs not arriving, surly reception staff and so on). 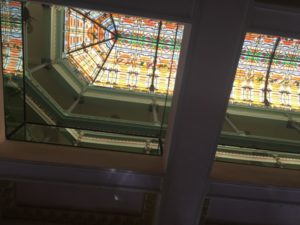 ..and looking up to its stained glass ceiling

Thank goodness Havana has a true luxury hotel coming, with the June 1st, 2017, opening of the Kempinski. Until then, for a fascinating experience, if you are prepared for less than superlative service, it does seem to me that Hotel Raquel would be first choice. Built 1905-1908 by Venezuelan architect Naranjo Ferrer, it became the centre to buy and sell fabrics, and for two decades, from 1970, the Public Utility of the Food Industry used the entire building as its headquarters. It opened 2003 as the 25-room hotel we see today. Operated by the Tourist Company Habaguanex SA, it is named for the Jewish heroine and is a reminder that many Jews came to Cuba following the breakup of the Ottoman Empire, although today Havana has only one synagogue left. Even if not staying at the Raquel, do visit, to look at its glorious stained-glass ceiling. And, wherever you are staying, hold tight, it is only six weeks until the opening of a true luxury hotel.  NOW SEE A VIDEO ON HAVANA TRAFFIC, BELOW