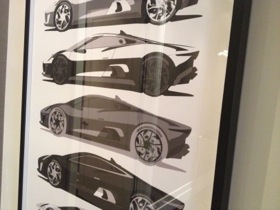 For those who love cars, and Jaguars in particular, suite 1142 at the luxury Taj 51 Buckingham Gate hotel is just the pad they need – what with a total of 1,800 sq ft and two bedrooms, you can even take a pal or two. The gal, as it happened, landed briefly, with only Paddington Bear for company. Bother, Mr Bear forgot to have his photo taken in front of one of the galaxy of car art in the suite, which was decorated by Jaguar’s chief designer, Ian Callum. The story on this Scotsman is like a fairytale: in 1968, aged 14, he submitted a design to Jaguar and now, since 1999, he has indeed been the marque’s chief designer. 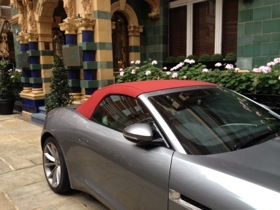 He is so passionate. He asked restorers Classic Motor Cars Limited CMC to redo a Jaguar Mark 2 for his own personal use and the response, said Auto Express last month, has been so positive that now CMC is going to build a limited run of them. Book one now, for about £360,000 – but even if you do not want to buy one, it is worth seeing how Ian Callum’s own car was rebuilt. Jaguar, part of Jaguar Land Rover, is owned by Tata, which also owns the Taj brand, and Cyrus Mistry, boss of the entire Tata portfolio, must be thrilled with Jaguar’s input (in 2013 they sold 425,000 cars worldwide, up 42 percent on 2012. 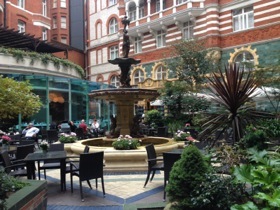 There is, not surprisingly, a Jaguar in the garden that the exclusive, hideaway Taj 51 Buckingham Gate shares with its more-public conjoined sibling, St James’s Court Hotel London – a Taj Hotel. The two, both red brick with cream accents, form a seven-floor horseshoe shape around the garden, which is a calm oasis ten minutes’ walk from Buckingham Palace, the Houses of Parliament and Victoria Station. A new living-wall makes going into the garden even more naturally delightful. Digvijay Singh, who runs both hotels, is also redoing Taj 51 Buckingham Gate’s elegant breakfast room (will he call it Dawn?) and, in St James’s Court, but open to both hotels’ guests and to outsiders, there is nook-like Laurent-Perrier bar. 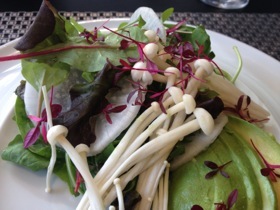 Stay in one luxury hotel or stay in the other, use both – including the spa, with its newly- restocked gym – and sign, wherever. This was my first visit to Bistro 51, which opens on to Buckingham Gate and thus attracts lots of outsiders. I could have had Indian, but I went for a salad (the just-appointed chef, David Tilly, arrived here from the former Taj Marrakech). I could have then taken the hotels’ complimentary shuttle to go shopping at Harrods or Harvey Nichols, or I could have hired the Jaguar… but instead, it was time to walk round to my next meeting.