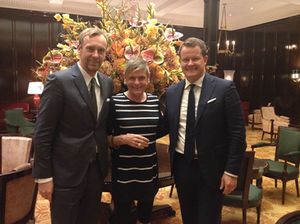 There are some luxury hotels that just attract the A-listers, and of course everyone, including the gal, wants to be in those places.  What ARE they?  Take early evening in Baur au Lac, Zurich. In the lovely panelled lobby lounge, Philippe Kjellgren and Peter Wallman were sharing tales after talking to an association of financial advisors to High Net Worth Individuals HNWIs , the ultra rich themselves and their financial gurus. Mrs T. Blair, also known as that tell-it-all autobiography writer Chérie – do not forget the E Acute – had also been talking to this crowd.  Bet all there much preferred hearing the Kjellgren-Wallman duo. 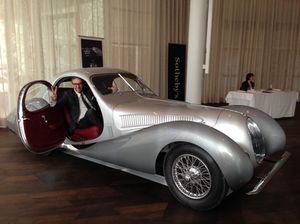 Philippe Kjellgren was explaining the value to the extremely wealthy of trusting hotel choices to Hotel Insider, the new online system that launches this December, at ILTM in Cannes.  More on this later, but one way of describing it could be a premium booking.com/trip advisor, with personalised online booking service, and subsequent reviews are all genuinely authenticated.   In what little spare time he has, Philippe loves networking, and driving fast cars, like this 1938 Talbot Lago T150 CSS Teardrop Coupé.  It is one of Peter Wallman’s client’s treasures. This is the guy to ask about buying cars as an investment.  His company RM Auctions, owned by its Ontario-based founder, Rob Myers, generally deals in cars that go for over a million (USD). 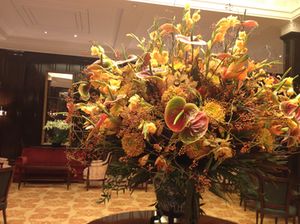 The luxury of stunning flowers…

In the last year, he says, RM Auctions has sold 98 cars for more than $1 million each.  At the May 2013 biennial Concorso d´Eleganza at the Villa d´Este for instance, jeweller Laurence Graff bought ‘something’. Less expensively, this September RM Auctions sold the 007 Lotus Esprit Submarine Car from The Spy Who Loved Me for a mere £616,000. In 2006 RM Auctions sold the James Bond 1965 Aston Martin DB5 for $2.1 million – after that sale, the new owner drove it round to The Dorchester, left it in the forecourt and headed in to the bar for a snifter to steady his nerves.  Upcoming auctions include one at Sotheby’s New York on November 21st, 2013.  Interestingly it is always the car, not its owner, which is invited to take part in such prestigious events as racing round Lord March’s Goodwood circuit. 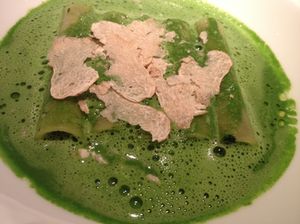 .. and a simple parsley-sauced pasta, with white truffle

The main car parked outside the Baur au Lac right now is a divine new Rolls-Royce in which I arrived from Zurich airport.  I know the designers did not have workability in mind when they fitted out such cars, but it certainly helps a hard-working girl to have good lighting in the back of any car.  Once here, I rushed up as always to the eyrie-like glass box that is the two-floor gym, atop the five-floor hotel. It was then down to dinner in The Pavilion, an exquisite conservatory of a room. Today’s specials, said Md’ Hans-Jürgen Schlatzer, is candle lunge, fresh semolina pasta tubes Naples-style, with parsley sauce and white truffle over, and it went well with Opus One 1999 (Andrea Kracht has already tried a bottle of the same batch, with a mutual friend, Bruno Schöpfer, last night). 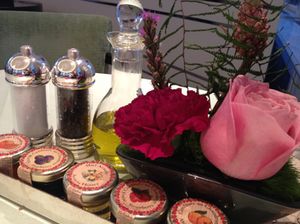 Understated luxury on the breakfast table…

Andrea Kracht, owner of Baur au Lac, has such a fine cellar that he represents 15 different labels, from Argentina to Spain, for the Asian market. He has agents in both Hong Kong and Singapore and if, say, a connoisseur living up on The Peak wants a case of Dominio del Plata Malbec from the ‘Evita of wine’, Susana Balbo, it is ordered via Zurich but is transported direct from Mendoza, Argentina, to Hong Kong. Andrea Kracht’s wife Gigi Kracht, on the board of The Guggenheim Museum in New York, is, meanwhile, into another aesthetic pursuit, art: it is she who organises the Baur au Lac’s annual summer Art In The Park sculpture exhibition, deliberately opened just before the start of Art Basel, only 40 minutes away by train – and this winter she launches her first Art Inside, with 11 female artists displayed throughout the hotel. This is a hotel full of beauty.  Look how gorgeous one’s breakfast table looks. 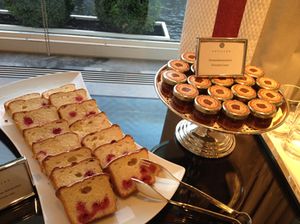 .. and, for some, the luxury of starting the day with fruit cake and chocolate sauce

And the buffet is beautiful too.  It is deliberately quality rather than quantity, with a choice of Amsel-spitz jars of yoghurts and lots of cold cuts, and eggs brought to order.  One idiosyncratic feature is a platter of fruit cake slices, with lots of little jars of chocolate sauce, from L’Ancienne. My mind thinks back to the chocolate shampoo at the home of sachertorte, and the fact that 97-year Richard Sprüngli, President of Lindt & Sprüngli, died suddenly October 22nd, 2013. I think forward to December 6-14, 2013, when Nobu Matsuhisa is guest-cheffing here at this luxury hotel. Anyone take a bet that he will not start his day with chocolate sauce on fruit cake?