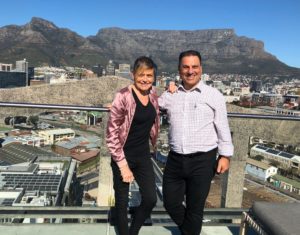 Cape Town’s newest luxury hotel is in one of the city’s most historic buildings, namely the city’s silos, built 1924 to store grain for transport to Europe. The area is minutely preserved by authorities, but the powerful philanthropic body, V&A Waterfront, realised that the building would make something truly unique.  See the result, above.  Thomas Heatherwick, one of the world’s most creative designers, has cut into the silos to make a museum, of which more below. The integral 11-floor rectangular building, which had to keep its main shape, is now a 28-room luxury hotel, suitably named The Silo. At top is a glass-sided swimming pool and, a few steps up, a glass-sided platform for 360-degree views of Table Mountain, downtown Cape Town and, immediately below, the waterfront. 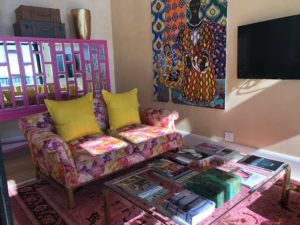 Heatherwick was able to insert sizeable, multi-faceted windows into the hotel area.  All rooms are at least eight metres high, and at night white blinds come down, turning some of the rooms into what would seem like giant upright coffins were it not for the colour.  Each bedroom is unique. Designer Liz Biden, the face of her family’s Royal Portfolio, is exactly the opposite of the ‘school of taupe’, those designers who work in 50 shades of mushroom. Ms Biden does bold, with a fuchsia closet here, a dayglo lemon sofa there, and one-off bespoke art works that each make a statement. When I was there for lunch, one party in-house came from the Middle East and were booked for 12 nights. This is a hotel that has to cope with 100% occupancy. 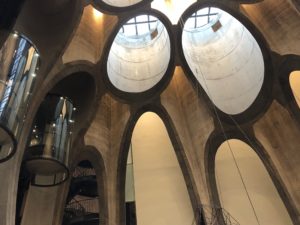 Inside MOCAA (looking up through cutaway silos)

It has many points in its favour.  One is the GM, the highly respected and experienced Luis Pinheiro, whom I first met at Lapa Palace, Lisbon, many years ago: here, he has compiled and trained an orchestra of staff that performs like the Berlin Philharmonic. Our server at lunch was formerly teaching in his native Zimbabwe – food, by the way, is another strong point. We started with seeded bread rolls, home-made, and I went on to the most beautiful beetroot terrine on a fresh pea coulis (yes, more colour!). And, of course, a big plus is that the hotel is conjoined with the Zeitz Museum of Contemporary African Art, MOCAA. Heatherwick has literally sawn through the insides of the silos to create a memorably awe-inspiring ambience, as shown. This is such an amazing museum, indeed, that it is, by itself, a reason to put Cape Town on any itinerary. 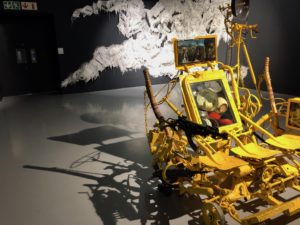 One of thousands of colourful exhibits

I called by as it opened, promptly at 10 a.m., and I was instantly impressed by the professionalism and friendliness of the entire operation. I took one of the elevators up to the sixth floor, where a restaurant would soon be doing good business.  I walked down the stairs, looking at exhibits on every floor.  I had thought many of the items on show might be traditional fabrics or masks but remember the collection’s name, CONTEMPORARY.  These are pieces collected over the year by Jochen Zeitz, the 56-year old German who ran Puma at 30 and transitioned to new Puma owner Kering in 2011:  as well as co-founding the B-Team sustainable initiative he personally started the ZeitzFoundation for Intercultural Ecosphere Safety to support sustainable solutions that balance conservation, community, culture and commerce. As the illustration shows, his African art collection is unlike anything I, and perhaps others, had ever seen – and the luxury hotel symbiotic with it is a one-off, too. HERE ARE VIDEOS OF AN INSIDE OF A SILO BEDROOM, AND THE INSIDE OF MOCAA