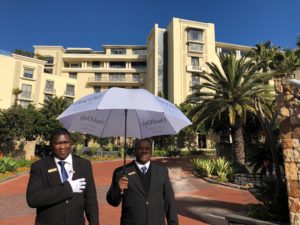 You know where you are when you look straight out at Table Mountain, Cape Town’s symbol, as distinctive as such man-made features as London’s Big Ben, New York’s Statue of Liberty and Sydney’s Opera House. On a good day fit visitors want to hike up there, to a height of 1,085 metres, easier by Platteklip Gorge (or even easier by cable car, which takes all of five minutes). But as the gal realised when looking at bellmen at the luxury One&Only Cape Town, the weather at the moment switches from wintry sun to rain. 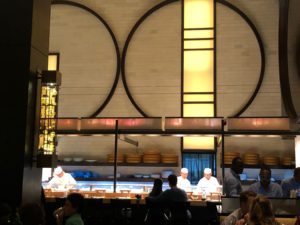 This hotel literally made waves when it opened a decade ago – the seven-floor building snakes around man-made canals. All 132 rooms, smallest size 63 sq m, have balconies.  I was in end suite 401 looked up Table Mountain, and down to the canals, with the hotel spa on a significant island. There are two popular restaurants, both reached by elevator, or 26 steps, down from the lobby.  We dined at Nobu, a draw in getting people actually to stay in the hotel (average stay is 3.5 nights, and 25% of all guests are domestic). In fact, 85% of all Nobu diners are either locals or visitors staying at other hotels. 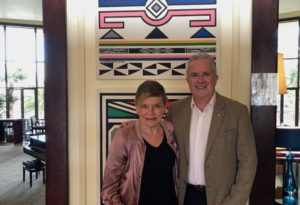 Going back to any Nobu is like going home, and yes, I started with eggplant and scallop tempura, went on to salmon and tuna sashimi and black miso cod with steamed broccoli. Richard Lyon, the hotel’s GM, ordered Waterford Estate Stellenbosch Cabernet Sauvignon 2016 (at the next monthly Cristal brunch, on July 27th, not surprisingly it is Roederer all the way). This is definitely a hotel for gourmets, and also for children: there are several Middle East families here, partly attracted by the lower temperatures that Cape Town offers as respite from the searing heat of their summer back home. The rooms and the public areas are big enough for kids not to feel confined. 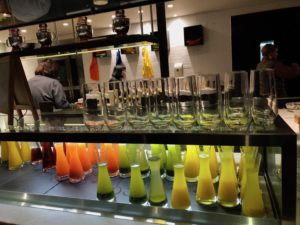 And all ages like the proximity to Cape Town’s V&A Waterfront and its shops and restaurants, although with breakfast included in the room rate it makes sense to have it here, in Reuben’s, the other designer restaurant, run by local celebrity chef Reuben Riffel (this is a colourful occasion, with scarlet china on the black tables).  Once again I found happy servers: Richard Lyon had told me how he has nearly halved staff turnover by making their transport more practical, and adding medical support for them and their families. Not enough luxury hoteliers actually follow the tried and tested maxim of  ‘look after staff and they will look after guests’, and the results please the owners, and here the formula works. NOW SEE FIRST SUITE 401 AND THEN PART OF V&A WATERFRONT