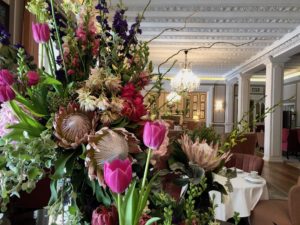 Tea is served in the lobby lounge

Belmond Mount Nelson – the ‘Mount Nellie’ – is the icon luxury hotel not only of Cape Town and South Africa but of the southern part of the continent.  It is also, together with The Beverly Hills Hotel far away in Los Angeles, one of the world’s most recognizable ‘pink hotels’ – this one was painted pink at the end of WWI and the colour still remains (see above). And when it comes to afternoon teas, this luxury hotel is as classic as that other Belmond property, Belmond Reid’s Palace, on Madeira. Afternoon tea here, actually from 9.30 a.m. on, is served in the lobby lounge, the adjacent conservatory and out on the terrace. Choose a Gongfu tea tasting ceremony with tea sommelier Craig Cupidco, says the gal, or a flower-themed tea (say Protea), or Jacquart Champagne or Boschendal sparkling, or even add Hendrick’s. 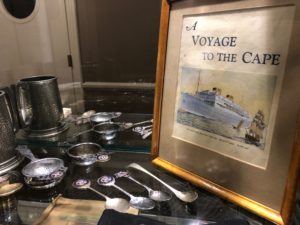 One of the many memorabilia displays

What is now a 198-room hotel was opened in 1899 by Sir Donald Currie, Chairman of the Castle Line, who desperately wanted to better his competitor, the Union Line, which had a Grand Hotel near Cape Town railway station for passengers sailing on its ships (in fact in 1900 the two shipping companies merged, to become Union Castle). There is so much memorabilia lining corridors of the hotel. See paintings of historic ships, and a 1900-ish map of Cape Town showing the central Mount Nelson and, still there, Company Gardens just south, across one road. The seven acres of gardens also have stories to tell. Some of the hotel’s bedrooms are in quaint late-19th century two floor houses, side by side with individual gardens: one such row, Sydenham Terrace, is next to the adult-only outdoor pool. 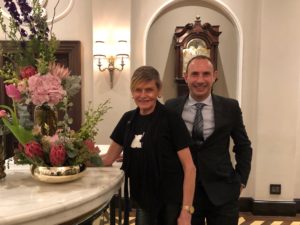 The 24-hour Technogym occupies the ground floor of a house in another terrace.  This is just behind the spa: I do admit it was my first visit to the spa and it was sensational, a really world-class facility, beautifully designed and really professional (I was having a quickie manicure and they fitted me in on the same day, which was jolly nice of them since they were almost fully booked, mostly with massages and roughly half-half, hotel guests and locals). This was my first visit, too, to the new-look restaurant.  GM Xavier Lablaude was away but his Director Ops and food specialist Willem du Toit, explained that the two of them, working with chef Rudi Liebenberg – a real organic and micro-farmer fanatic – had decided it was time to go back to the future, and call it Lord Nelson Restaurant. 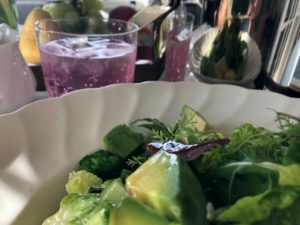 The result was such that every table was taken. This is the place for classic steak tartare skilfully made tableside, and such national dishes as springbok loin with Jerusalem artichoke, and, of course, a local Pinotage, in this case Rijk’s 2015 Touch of Oak. Yes, they know what they are doing when it comes to both food and drink, and there are such special complementary events as a singing duo, soprano Lisa Engelbrecht and mezzosoprano Lindsay Thompson, on July 27th . I lunched desk-side, writing, off a green salad with extra avocado, and of course I just had to make a G&T from my inroom supplies, namely Pink Lady Cape Town Gin and Fitch&Leedes rose-flavoured pink tonic (I left the pink macaroons).  Naturally, with all this intake I needed lots of exercise. As well as the gym and two pools, this is a luxury hotel that thoughtfully identifies the amazing trees on its seven-acre estate (the 80 Canary Island date palms flanking the main drive, for instance, were planted in 1925 for the visit of HRH The Prince of Wales). WANT TO SEE SUITE 331, AND STEAK TARTARE BEING PREPARED TABLESIDE?