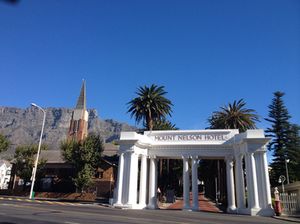 The Nelly – now officially known as Belmond Mount Nelson – is the doyenne of Cape Town’s luxury hotels. Its entrance way is as distinctive a logo as the shape of Burj al-Arab, or the view from Sanctuary Lodge by the gates of Machu Picchu. Its history, says the gal, goes back to 1743 when land was granted to Baron Pieter Van Rheede van Oudtshoorn. After his death it passed to Dominee Fleck, and in 1806 it was auctioned, as the Mount Nelson, named for Table Mountain, behind, and Nelson, who had died the previous year. 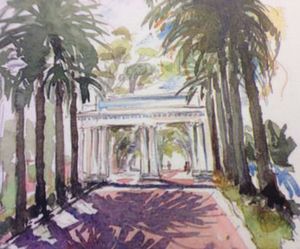 There are so many features that are instantly recognisable. Let me start with the collateral, notepad covers, postcards, doorknob lists to order room service breakfast. They are all watercolours by Patricia Fraser. This one shows the entrance arch, and through to the Prince of Wales drive, the bricked driveway laid out for the visit by the Prince in 1924. As he was driven up it, and as I run up it today, I see to my right some of the gardens laid out in 1843 by John Ross, with over a hundred species of trees, including 57 massive palm trees. 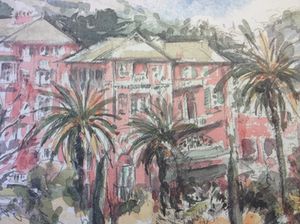 The main house, according to the artist

This is more a sprawling village than an ordinary hotel. The main house, shown here, is pale pink, with white highlights. Other, detached, buildings make you think of England, with Green Park, Sydenham Terrace (tiny row houses, now each a letting bedroom) and Taunton. A white block, Helmsley, has got in for good, and American, measure. I have tried most types of accommodation in the 286-room hotel, and I honestly do not have a favourite, though being near the gym (24/7) and the fabulous Oasis breakfast buffet is a plus. 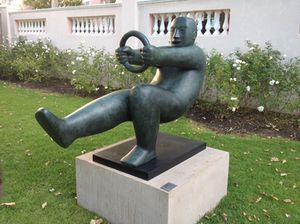 The GM, Xavier Lablaude, is a passionate environmentalist. He has brought in electric bicycles, with Cyclology -guided city tours three times a day, and the hotel’s town cars are Toyota Prius Hybrid Synergy Energy Drive. He is also a dedicated arts lover. A room next to Planet Restaurant is now the Nkanyezi Gallery, a joint venture with Maboneng Township Arts Experience that showcases works from nearby townships. Working with the Everard Read Gallery – which interestingly is owned by Ellerman House’s Paul Harris – Xavier Lablaude has amazing sculptures set throughout the gardens. Some are brightly-coloured metal, similar to those at The Saxon (which I suspect also came from Everard Read). Others are stone, some are metal. This is Florian Wozniak’s bronze Hard Drive, a full-sized man, who morphs into a car. 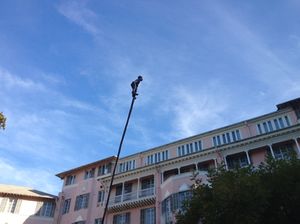 Kids especially like climbing in and around this particular work, and they get a kick out of touching the weight at the base of Brendhan Dickerson’s One-Up, a stainless and wrought iron high-high flying man, so that he does appear to fly. The Nellie’s afternoon tea, best-known on the continent with sittings at 1.30 pm and 3.30 pm, attracts masses of families, and when the weather allows them to sit outside the kids climb the sculptures while parents, especially well-upholstered mummy, enjoys at least a glass of local bubbly with her scones and chocolate cake. 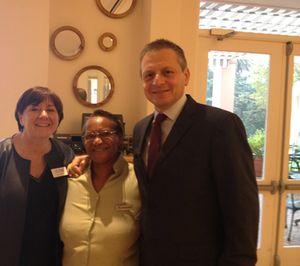 No time for me for afternoon tea, or teas, at this luxury hotel. Believe it or not I am here, doing daily Gostelow Reports Live for Reed Events, organiser of the phenomenally successful annual ILTM Africa. I run into Reed Events’ Senior Director, Alison Gilmore, and then it is time to go to the show.