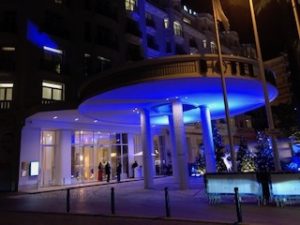 The Martinez has been Cannes’ answer to Hollywood since it was opened, by Emmanuel Martinez, son of a Sicilian aristocrat, in 1929 – he was Chairman ofthe Société des Grands Hôtels de Cannes and, deciding he wanted his own hotel, converted and expanded what had been the exiled King of Naples’ Villa Marie-Thérèse.Now coming up to its 90th birthday, it was, to be honest, ready for a massive face lift. It re-opened on March 5th, 2018, as a member of Hyatt’s Unbound Collection, to reveal sumptuous opulence that is absolutely right for the glamour that is associated with the annual Cannes Film Festival, with other events and, well, just being in town any time of the year. The gal feels special even arriving at the hotel, particularly in the evening when the Croisette main entrance, covered with a nearly-360-degree circular overhead canopy, is floodlit for yet another evening extravaganza. 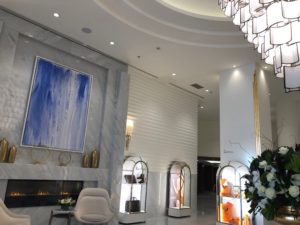 Inside the 409-room hotel, Pierre-Yves Rochon has worked design magic that he does so brilliantly (think of Four Seasons George V in Paris and, in London, The Savoy). The lobby is now a masterpiece of marvellous off-white marble. Inset to the left is an eco-smart inset gas fire. Look forward to the magnificent oval staircase, 177 steps, now clad with tight-fitting grey-mottled carpet, ground to top, seventh, floor. Up there, en route to the L Raphael beauty salon and the upgraded 24-hour Technogym, with outdoor rooftop patio, you can look down through the stairwell for a beautiful and somewhat Escher-type effect (see above). 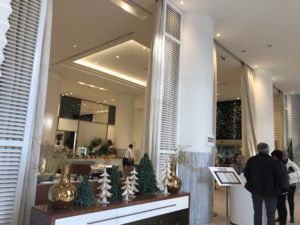 I was in front-facing room 325, looking out over the Croisette, and the Mediterranean. The room was just as beautiful as the public spaces, with lots more white marble, and white paint, and shelves over the long wall-set table that bore blue and white sculptures, and white sculpture ‘books’. There was blue, too, on the bed, in the form of cushions and throw – see the video below (I was told later that some north-facing rooms are yellow-hued rather than blue).  An all-wall window looks from bedroom through to bathroom: like soaking in sweet-smelling Bergamot for Fragonard, especially for the hotel, and look right across the bedroom and living space to the view outside (if you prefer, a modesty panel, silver with lots of fishes, easily slides across the inner window). 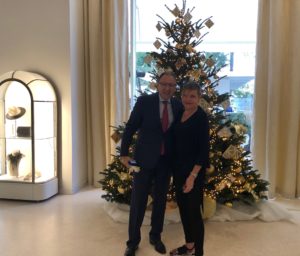 Another enhancement is the dining. There is still the Michelin-starred La Palme d’Or but what was the ground-set brasserie, opening off the Croisette, is now an evening-only bar, with skilled mixologists and live music. The former bar and sitting area, dark if I remember correctly, led off the lobby: today, this has metamorphosed into a light-and-white Version Originale, with open kitchen.  Come here for such simple and really tasty dishes as creamy burrata with salad, or a Buddha Bowl Caesar, or a French-beef grill with your choice of sauce and side. I would expect many to accompany a meal here with a glass of house Champagne, still Taittinger, in honour of the house that owned ‘The Martinez’ for a time. Yes, this is one of the ultimate sumptuous-luxury hotels and you feel like a star – but avoid booking anything May 8-19, 2019, for that is when actual Hollywood names are in town, for Cannes Film Festival. SEE, FIRST, ROOM #235, AND THEN BREAKFAST