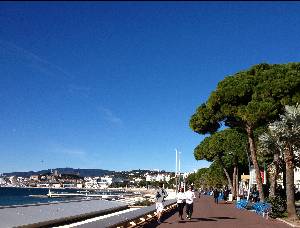 Cannes is said by some to be a town of the third age, wrinklies and all that – and from time to time the rest of the lifecycle comes to visit, at ILTM, at Film Festival time and for other meetings.

That supposition is simply not true.  If the weather is lovely, Cannes is lovely, and, whatever age you are, the lifestyle here is sensational.

For visitors, you have a choice of fabulous luxury hotels: the keynote hotels for ILTM are, from west to east, Majestic Barrière (closest to the Palais, where the exhibition took place), the Carlton InterContinental and the stylish Martinez, the gal’s home in Cannes.  From there, I set out pre-dawn to run east to Place Franklin Roosevelt, where Casino Palm Beach is. 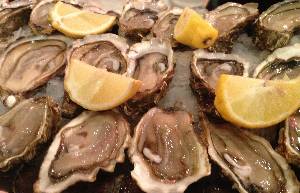 But at any time of day you see people running.  Come meal times, food is taken seriously.  Breakfast for locals might be a croissant dunked into milky coffee, or a jus d’orange, but lunch and dinner are great meal experiences.

Right now oysters are in season.  Head along Rue Felix Faure behind the Hotel Splendide and you find side by side restaurants spilling out on to the pavement sidewalk.

You merely say how many oysters you want, and what type, and they come, as passengers in an ice-filled boat, with lots of lemon wedges, and buttered bread. I ate twice at Le Rendezvous, loved both visits. 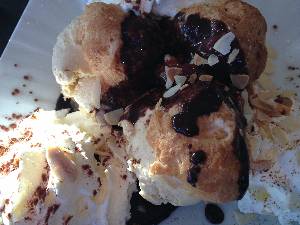 .. and finish with dessert, say profiteroles with extra chocolate sauce

Part of the fun is watching the locals progress on to cheese or desserts, and sometimes both, in that order.  The French are different.  They eat high-calorie, high protein meals, perhaps finishing with a giant bowl of profiteroles on which they then pour lots of chocolate sauce.

All this consumption somehow does not put on weight – think of the chic maids in the Martinez, compare them with counterparts in other parts of the world – no need to name where…

A Frenchwoman recently wrote a guide book for foreigners coming to France. Greet anyone, everyone. Say hello to the street cleaner, or perhaps he greets you first, in which case you greet him back. 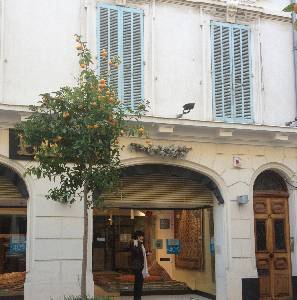 Some shopping streets are lined with fruit-full orange trees

And it works.  You feel good, even when the ATMs will not take your credit card and someone in a store cannot understand your rudimentary parlez-vous.

But come out of the shop and you admire its window display, and the fact that some streets, like Rue d’Antibes, have real live orange trees flanking the street, and no-one has nicked the fruit.

Rue d’Antibes has the choice of ‘essential’ stores: many of the non-essential but would-like stores are along the Croisette, nestled one next to the other, interspersed sometimes with bars and more brasseries.

Ferragamo, on the Croisette, turned itself into a party venue one night during ILTM, the privileged hosted by the Ferragamo family’s hotels’ boss, Valeriano Antonioli, CEO Lungarno Hotels. 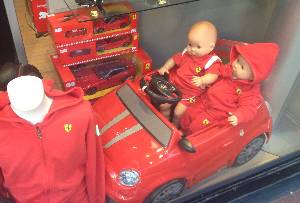 It is kids' play, Ferrari-style

I could wander some of Cannes’ back streets for ever. One store has a display of colourful, day-glo even, toy cars for kids.  Almost next door is an entire display of red Ferrari gear for a little one, with car he, or she, can get into and the appropriate clothing.

Little Philippe or Jean-Pierre will be almost as well dressed as the macho adults manning the real Red Travel scarlet Ferraris in front of ILTM, at Palais des Congrès.

I find out that just as a Ford invented Fords, and a Lamborghini gave his name to Lamborghinis, so Enzo Ferrari unwittingly started an entire cult when he set up an automobile factory in 1929. 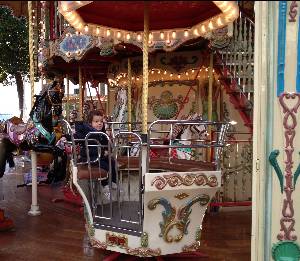 On my way back home, in other words en route to the Martinez, I pass the kids’ playground in Espace G. Pompidou, immediately to the east of the Palais.  A pool, about 20 feet across, buzzes with electric boats remote-controlled by carefully concentrating youngsters of both sexes.

Nearby is a carousel, or merry-go-round, with two levels of carriages that swirl, and horses that go up and down, as the whole caboosh is turned electronically.

I am reminded of Nice’s iconic luxury hotel, the Negresco, where the breakfast room is Carousel, and there are wooden horses – but they are static.