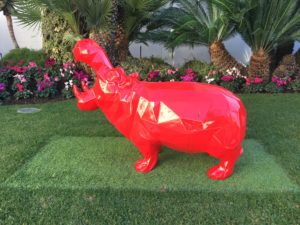 Welcome to the hotel…

Luxury hotels that get better have listened to what pundits on luxury are saying. Merely doing a good job in today’s frenetic world is seen as failure; you must do better than good, you must exceed expectation and be sensational. That is what the gal found during this year’s ILTM. With the Martinez – which will re-open March 2018 as one of Hyatt’s Unbound hotels – and what was the Noga-Hilton having gone through name changes along the way to its current J.W. Marriott status, there are only two iconic hotels currently open on Cannes’ famous Croisette. The Majestic, owned by the Barrière group, is closest to the Palais des Festivals, home of ILTM, and it rolled out the red carpet, and a red animal as welcome. 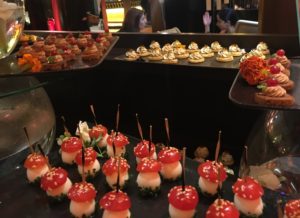 Pierre-Louis Renou, the indefatigable boss of the Majestic, somehow seemed able to greet people checking in, and if he was otherwise engaged one of his team came out to say goodbye. I was actually greeted on arrival by Isabelle, who has been at the hotel at least a couple of decades, and, oh so French, she is just as chic as Mme Macron (how DO they do it? I wish there had been time to try the hotel’s Diane Barrière spa but at least I could use its LifeFitness gym, now 24/7 (thank you M. Renou, better and better, for success). I also made use the staircase, above. The food, by the way, is superb, with Pierre Gagnaire’s hand definitely visible in the quality of breakfast goods – adore the yoghurts. This is also one venue that knows how to do cocktail food beautifully, and if they do it right and consumers like what they see, who cares if every function seems to include little ‘mushrooms’ with tomato tops? 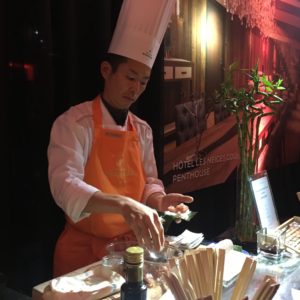 I had them at a party in the indoor Majestic Beach Club hosted by Tout’France, who last year did such an unmemorable and expensive event in a draughty, cold castle up in the mountains somewhere. Yes, this is another example of better than ever. I tasted yet more Majestic mushrooms at the Taj party in a hotel salon, where Taj’s Chief Commercial Officer Chinmai Sharma explained such new happenings as Taj Exotica in the Maldives, opening next month. Le Cheval Blanc’s CEO Erik Boonstoppel hosted his usual sumptuous silver and white cocktail in the hotel’s rooftop suite, complete with lots of bubbles and silver horse-shaped balloons. And Pierre-Louis Renou, of course, through his annual party for local hotel friends and top travel advisors – he does the same, he says, for the opening and closing of the Cannes Film Festival, with CCTV throughout so everyone can see who is coming and which names to remember. 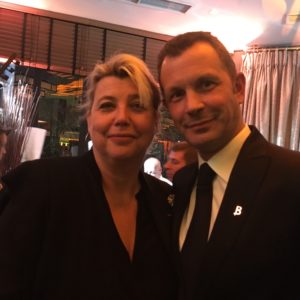 For his ILTM party, this clever luxury hotelier made this year’s even more magnificent. A small number were invited to the pre-disco buffet, which did, indeed, have more mushroom shapes but also tables of oysters – with shuckers, tables of magnificent cheeses, and as well as unlimited Vranken’s Diamant Brut there were such bespoke cocktails as a Bloody Majestic, namely Polugar vodka, sake, yellow tomato juice, Thai basil, celery salt and a lemon twist, Menton naturally. By the time the disco crowd arrived there were 2,000 at the party, which took over the entire ground floor of the hotel. The host escorted the co-owner of Vranken, Nathalie Vranken, and stayed until the music was turned off at 1 a.m: his team miraculously returned the hotel to its pristine state, breakfast opened 6.30, Renou was gliding between packed tables by 7.45 a.m. Everyone still seemed to be smiling, perhaps in the knowledge that the day after ILTM finishes, there is a mammoth staff party – I hope they too have those divine mushrooms – and then the hotel closes, for its annual holiday, reopening just in time for New Year. NOW SEE ROOM 343, BELOW