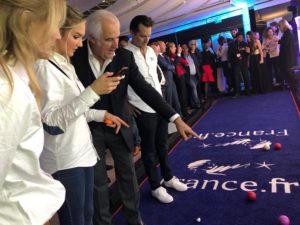 Boules on the beach

Hôtel Majestic-Barrière is automatic home for many luxury hoteliers during the frenetic week of ILTM. It has the advantage of being the closest hotel to the Palais, where ILTM takes place. It also, like some of the other great hotels along the Croisette, has its own beach, but cleverly it has been able to build, on the sand but protected from storms, a permanent year-round building that obviously is an ideal party venue.  The first night of ILTM 2018, the space was once again taken by Tout France to show off the French palaces. There was, as one might expect, superb food and wine but also, cleverly, there was a boules competition, which really sparked the enthusiasm of not only the French guests. 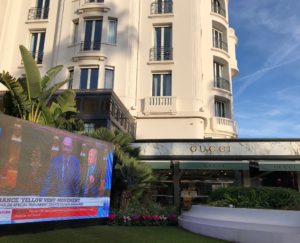 Walking up to the front door

It was parties at ‘the Majestic’ all week long.  Some, like Tuesday night’s Le Cheval Blanc’s rooftop Majestic Suite cocktail and, simultaneously, Taj’s event on the main floor, are long-planned, with guest lists checked at the door, and Champagne and little canapés, and sometimes hot dishes cooked to order.  Others are impromptu parties, that just gather on the spur of the moment.  Try walking through the main ground floor bar, which is really a corridor with a bar along one side, and you can barely get through Tuesday or Wednesday, after the main ILTM show finishes. I ran into a lot of my friends from Trump hotels here, and, in other corners, Aman here, and Dorchester Collection there. 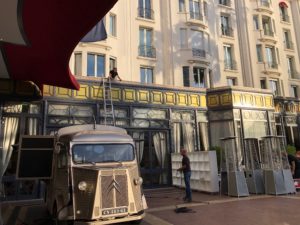 Getting ready for the party

The seven floor hotel – see its façade, above – has an elegance that was typical of the late 1920s. Its open staircases, with wrought-iron banisters, have black and white photos of film festival stars of yesterday, many of the men smoking, the women immaculately groomed and coiffured. There are omnipresent signs of the past, but also of today.  A giant screen relays live television, real-time, at the main approach of the hotel drive.  On ILTM’s Wednesday afternoon, as always, preparations skilfully and discreetly began for the hotel’s annual party. A classic van was brought along, later to provide food: awnings and Bordeaux burners meant part of the hotel’s drive became an essential space for the party itself.  This year co-sponsored by Leading, the party’s food, and Vranken Champagne, was as memorable as ever. 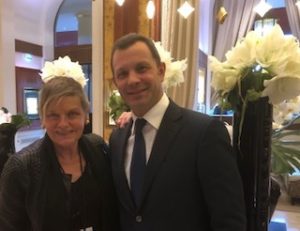 Actually I must honestly say that the quality of food, and service, at breakfast every day throughout ILTM gets even more memorable with every year. Now, the buffet tables have nearly everything you might want – a couple of Size Zeros next to me asked for berries, and, separately, sliced avocados and they got’em.  My omelettes (moist or well done, ma’am?) were right up there, with smiles, and I loved the onion-studded bread rolls.  Yes, this is a luxury hotel that is essential, particularly at ILTM. But, all the time, it listens to guests (the gym is not only 24/7 but one of the Technogym joggers can be rolled forward, to the first floor terrace, to work out in the fresh air).  And, says hotel GM Pierre-Louis Renou, who seems to be everywhere, all the time, during this ILTM week, by this time next year even more of the 349 bedrooms will have evolved from current brown to soft grey, as redesigned by Chantal Peyrat. SEE ROOM 343.