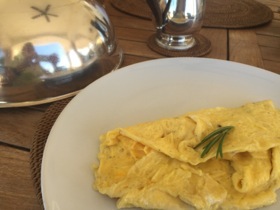 There are some guests who love setting challenges for luxury hotels – rustle me up a wedding for 200 in 20 hours, that kind of thing. There was a passenger, long since gone through the pearly gates, who challenged a cruise ship to produce a whole deep-fried turkey followed by baked Alaska. OK, said the gal, here you are in Hotel, no not Babylon, but Hotel Vidal, give’em a task. The head of this hospitable household is French, grandson of one of the great food conglomerate bosses of that country. Being French, presumably he is interested in food? 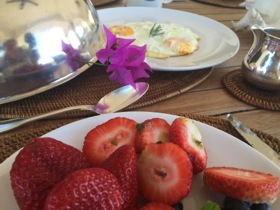 Day one was to be an omelette. No problem. The houseboy had set the outdoor table, on the terrace here in Los Cabos. I had all the berries imaginable, garnished with mint from the garden. I had amazing yoghurt, a Mexican breed of whole fat, no added flavour – that reminds me yet again how Americans have RUINED yoghurt. Even in WholeFoods all you can see are 50 shades of zero-fat, stuffed with sweetened berry purée that piles on the calories. OK, houseboy brings coffee (espresso or real-French?). The table is set with pink Himalayan salt, a curvy silver jug of strong olive oil, and excellent wholegrain toast in a silver toast rack of which Rosewood London, a sibling to Las Ventanas (Vidal’s ‘real’ hotel), would be proud. 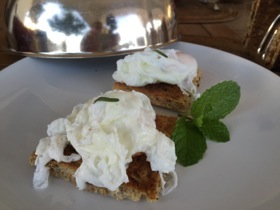 And then comes a cloche, a proper shiny silver cloche, which is pulled off with a flourish to reveal an omelette as good as any I have ever had in a real hotel. But this has to continue. I do not want my host to be bored, to think he can get away with just rustling up a croissant to dunk in said coffee – which comes, by the way, in a Raffles Singapore mug (cook, sorry, host later recovers in the jacuzzi, wearing his pink and white striped Beverly Hills Hotel Vilebrequin-style swimmers). He is obviously the ultimate hotel obsessive. Evening two he asks about tomorrow’s breakfast. Two fried eggs, over-easy please. I am sure the cloche is polished overnight. The chef has turned the commodity of fried eggs into a work of art. 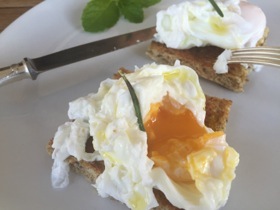 and yes, they are perfect inside

The final evening my host-with-the-most holds his breath while asking my egg request for the morrow. Poached egg. Mon dieu, I will be up all night practising. Next morning I believe that statement was correct (the houseboy smiles and nods his head). My breakfast arrives, as before, and here is the cloche. It is taken off, with a flourish, to reveal a pair of perfect poaches, topped by the sweetest-smelling rosemary imaginable. And the final touch was breaking into one to find its yolk, marvellously dark, was still magnificently runny. With that, I checked out, and presumably M. Vidal is still recovering. Having one guest must be tougher than running even his luxury hotel…