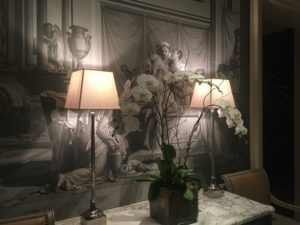 The lobby, as you enter, now

The luxury Lowell hotel, just east of Central Park on 63rd Street, is truly a place of beauty – three guests, separately, are apparently so smitten with the place, the gal heard, that they have never checked out. Stay in one of the 74 rooms and suites, of which 33 have working fires, and colours and alignments are perfectly in harmony. This is partly thanks to top residential designer, Michael Smith, who has now also opened up the hotel lobby. What used to be a somewhat intimate, another way of saying cramped, space is still manageable, but you can turn round. New, behind the lobby, are a couple of library lounges exclusively for hotel guests. 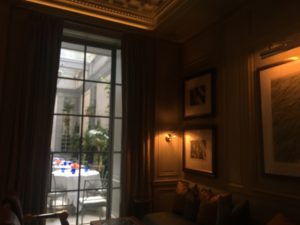 Look from a new lounge out to the garden

Sit near one of the lounges’ real-look fires, eat, drink, snooze or work, look around at the library, admire the stunning flowers, perhaps look through glass doors to an enticing outside terrace. Just as Michael Smith has created these library lounges from administration offices, so the terrace formerly looked like a junkyard, with air-conditioning units. After three years’ work, this hotel has now added one of the most beautiful restaurants in any hotel, anywhere in the world. Enter from the hotel lobby, through anonymous double doors, or from the street. Walking back, you pass an alcove that can be bar overflow or private dining, and the side-set bar, Jacques, partly obscured by sweetest-smelling lilies, and then various seating areas. 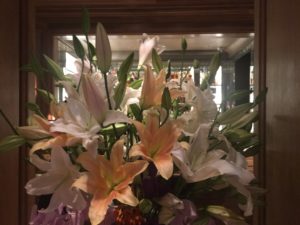 Through to Jacques bar

This is Majorelle, named for garden architect Jacques Majorelle 1886-1962, and hotel GM Heiko Kuenstle has had the good fortune to work throughout its creation with its manager, the already-legendary restaurateur Charles Masson. It is he, more poised than most diplomats and certainly more than the current crop of politicians, who greets you, and controls his corps of servers like a ballet. I was lunching with Heiko Kuenstle, and Charles Masson took us straight to the rear garden, a conservatory with working fire and roll-back roof (gosh, was this REALLY that awful storage space of yesteryear?). I ate simply, intrigued that Charles Masson could make a simple lettuce salad into a taste sensation: well, he says, he knew Manhattan’s Ladies Who Lunch would want zero calories, so this salade Majorelle is sweet inner Romaine leaves, known as sucrune, and basil, cucumber and mint. 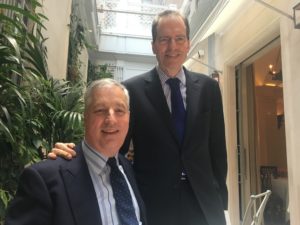 And then came the best cheese soufflé I have ever had – yes, Albert Roux’s soufflé suissesse must now take second place. Here, Christian Délouvrier’s soufflé made with equal parts of Brillat-Savarin, Emmenthal, Parmesan and Romano Conté and you must at least taste the accompanying just-made sourdough rolls, made with 19-year old yeast that the luxury hotel’s baker keeps in a refrigerator (one night, says Charles Masson, the keeper of the yeast called him in a panic at 2 a.m. as he, the KotY, had forgotten to put it back in the cooler so he, Charles Masson, who obviously lives closer, went round to Majorelle, found the absconding culprit and put it back in the refrigerator). Finally, at this truly memorable lunch, a couple of absolutely exquisite desserts were presented, both looking like David Shilling millinery creations for the Melbourne Cup – see one such item of beauty at the top of this story. As I left I could well understand how the 75-seat restaurant does over 100 covers every night.