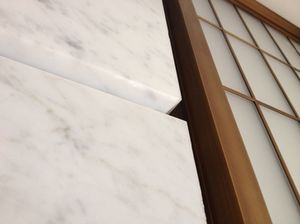 The sheer beauty of workmanship is what differentiates real luxury from the norm. Take a hand-stitched Hermès handbag, where one worker, man or woman, stitches with two needles simultaneously, and makes one entire bag, start to finish.  In the world of luxury hotels, look at the sheer beauty of workmanship at Café Royal Hotel London, a Leading hotel which, although opened December 2012, will finally unveil its spa and pool this September.  The gal has, of course, already been there, but only for lunch.  What is it like actually to stay, and wake up to an environment where your room might have whole walls of Portland stone, each block beautifully bevelled as an art work? 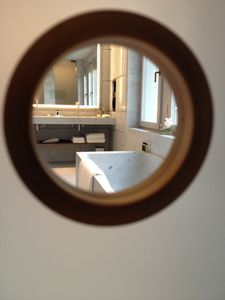 Bird’s eye view to the bathroom

Some rooms, say 502 (a Mansard-roof suite), has some walls that are all wood, simple, unvarnished, unpainted English oak, matching the floors throughout all the bedrooms. Somehow, regardless of the wall material, a false front wall allows air control to be fed out seemingly from behind the wall, which means no horrid air vents.  There are lots of windows, but since you are right on Regent Street, soundproofing is achieved by double windows, both double-glazed. All 160 rooms, however, have magnificent stone bathrooms, with under-heated floors and big stone bathtubs formed of single blocks of Carrara marble.  Sit in the toilet stall, which has a frosted glass door for privacy, and if you look through its cut-out (its ‘handle’) you get a bird’s-eye view of the bathroom beyond. 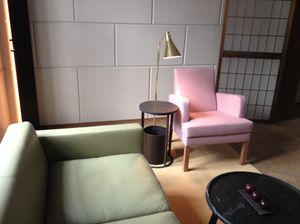 Colours, as decreed by designer David Chipperfield, are minimalist.  You have the steely-white of Portland stone, the mushroom of oak, and soft pastels of furnishings, perhaps a pale rose leather chair, perhaps a pale pistachio sofa, and a delicate lemon throw.   The furniture is all hand-made in Italy, probably hand-stitched (one worker manipulating two needles simultaneously? Possibly not…).  When this building was first put up, in 1865, everything was lovingly hand-made, for the then owner, Daniel Nicols, a Frenchman who was a fan of Napoleon. It is said he was away when his son-in-law OKed designs for the stained glass over the then-Café Royal’s front door, on Regent Street, which resulted in the crown-topped N that has become the building’s signature. 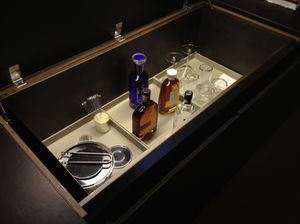 A minibar (no absinthe here!)

In the past, Oscar Wilde frequented what is now the glorious over-the-top Grill Bar – as hotel GM Louis Sailer says, this will once again be THE place to be seen. You are surrounded by rococo mirrors, gilding, frescoes, scarlet velvet upholstery. Sit in Winston Churchill’s favourite seat, far end corner on the left. Drink an absinthe (‘green fairy’), if you must.  Oscar Wilde, plus van Gogh and Modigliani, were among those who loved the anise-flavoured green spirit that originated in Neuchâtel, Switzerland, in the late 18th century.  It was universally banned around 1915 but now (minus the poisonous elements) there are nearly 200 brands being produced. 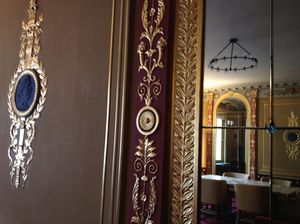 The chef here at Café Royal Hotel, Andrew Turner, is one of those really imaginative guys: his signature cake, which he swears will one day rival sachertorte, is Circle Noir, a deep chocolate cake with a hole in the middle and yes, it has a hint of absinthe in it, as does one of his home-made chocolates.  I also love the look of his apple cakes, topped with tête-de-moine-like swirls of apple, and his lemon cakes – see them all in the Café, the hotel’s all-day meeting place that is right on Regent Street.  Over dinner at Ten restaurant, Andrew Turner shared with us all his other culinary highlights, like the hotel’s specially-churned butters flavoured with pink Himalayas salt, and the five unique cheeses he is bringing in (one is rind-washed 61 times, in absinthe…) 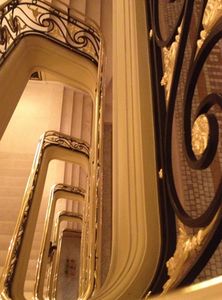 Looking down the original stairwell

This is old and new, a perfect marriage.  As well as the 19th century columns in Ten restaurant, which has an upper gallery that will be a private club, opening soon, there is the Grill Bar, and the classicism of the main lobby with its N windows, and N in the tiled floor.  Some suites have salons that go back to early days.  The original staircase, with its Ns set into the iron railings, is a work of art all in itself.  This place is unique, similar perhaps only to that other home-of-a-cake, The Hotel Sacher Wien, in Vienna.  Perhaps there should be a new category of luxury hotels, those with cake associations?