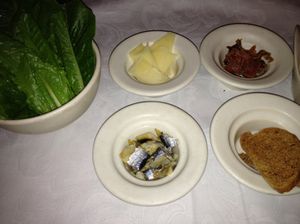 A Caesar salad has nothing to do with Augustus or Julius or any other of the Roman emperors.  The general assumption is that a certain Caesar Cardini, an Italian immigrant who worked his way up to run restaurants in southern California, especially San Diego, and south of the border in Tijuana, had to use his initiative on July 4th, 1924, when he had run out of supplies for what he normally would have made.  So, just as so many chefs in luxury hotels have to do, he turned to his common sense, and added Italian flair.  The gal would have loved to have seen him tossing whatever, tableside. 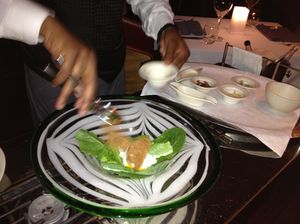 His daughter Rosa, 1928-2003, was not even born at that time but we can be quite sure she went through a lot of Caesars in her lifetime.  It seems today every restaurant has a variety, or several, of its own.  The classic is Romaine lettuce and croutons with Parmesan, lemon juice, olive oil, egg, garlic, black pepper and Worcestershire sauce.  The original, note, did not have anchovies in it, and was made with whole lettuce leaves that you picked up by the stem and nibbled, like a rabbit. Now many menus offer you Caesar with add-ons of chicken or shrimp or salmon or goodness knows what.  Who makes the best Caesar today? Try putting that into Google and you might even find an answer for the tiniest village near your home in Dunedin. 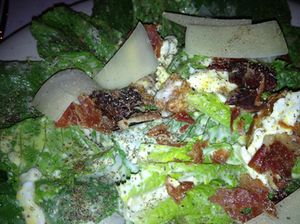 I had a jolly good Caesar in Vin in the Sandton Sun, Johannesburg.  I had thought I was going to the InterContinental, which used to have a separate Towers wing joined by an airbridge.  During my short – well, a few years – absence, the main hotel has turned into Sandton Sun (and very nice it is too) while the Towers is now the InterContinental. The maître d’ making my Caesar performed with such a flourish, and his hands moved so fast, I was worried that he might crack, or even break, the gorgeous green, white and clear glass bowl he was mixing it all up in.  The breads that came with it included one type studded with bits of chocolate, which could have been a new type of Caesar, with chocolate (bread). 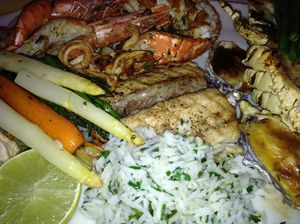 Next, a seafood plate

The Chef here, Garth Shnier, is a most agreeable guy who believes in local produce.  He uses whatever products his nearby farmers, and I guess fish suppliers, can come up with, and of course it is all organic and green – sign a bill and even the pen they give you is made of recycled paper.  He suggested, to follow, a seafood platter, and held his long arms out so wide it almost indicated that he had an entire whale tonight.  He promised to modify his ambitions a bit, and I ended up with a square plate, not an oval wooden platter, of absolutely delicious seabass, crayfish, tiger prawns and mussels and all things nice. Brett, who I was having dinner with, said one of his daughters’ favourite foods is cupcakes (after all my sea creatures, I sadly could not even face looking at the dessert menu). 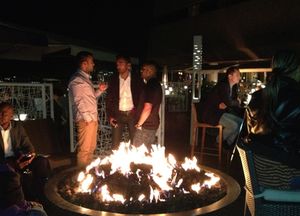 The fire-pit terrace is THE hot spot

We did both move out to the adjacent terrace, to look around us.  On weekend nights, Thursday through Sunday, up to 350 younger-age movers and shakers gather here, around the bright firepits, and moving to and away from the bar area. There are all ethnicities of Johannesburg here, including lots of ‘black diamonds’, some amazingly dressed.  Looking across all this I could just make out the illuminated edges of the Norton Rose building, which reminds me somewhat of the Burj Al-Arab in Dubai (this one is designed by Anthony Orelowitz and Henning Rasmuss of Paragon Architects). 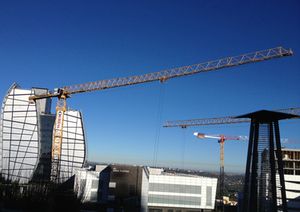 Architects in the Sandton area of Johannesburg are certainly doing a lot of interesting things right now.  In the morning, I can see over the now-empty terrace at the Norton Rose building – and the cranes around. Sandton now having its own Gautrain station makes it an even more desirable office and retail area. And the station being only a couple of blocks from the Sandton Sun makes this luxury hotel still more attractive.