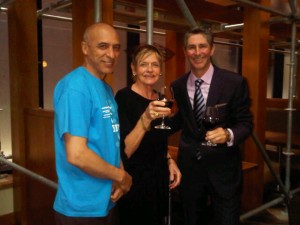 Final thoughts on this visit to Vancouver.  I was lucky enough to see the work being done to enhance YEW in Four Seasons – yes, it is only three years old but the restaurant needs a bigger raw bar.

Here I am with server Hamed from Marrakech, Morocco, Mary Gostelow and hotel GM and Regional Vice President Robert Cima.  We are drinking a local BC Merlot, Mission Hills 2008.

The design of YEW is being tweaked by Jennifer Johanson, Engstrom Design, who did the original concept.  The two-way working fireplace with its magnificent ceiling-high stone surround of course still remains, as does the more-casual bar and lounge area of what is an all-day eatertainment venue. 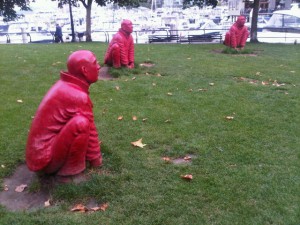 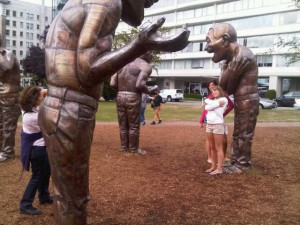 One of the Seaside sculptures

And then I cycled yet again around Seaside, on one of the Fuji bikes from Opus Hotel Vancouver. 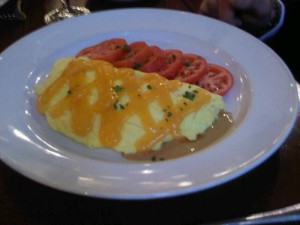 My final meal was breakfast at Griffins in Hotel Fairmont Vancouver, and, as always, Mark Andrew had his unique peanut butter omelette.