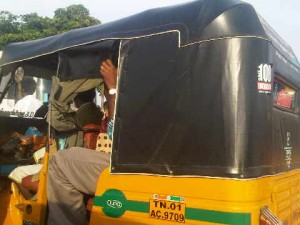 Yet another tuk-tuk, this time in Chennai

The tuk-tuk is a vehicle that has transported billions throughout India and south-east Asia.  Luxury travellers a few years ago took them from, say, the then-lovely Hotel Borobudur InterContinental to get to downtown Jakarta: now, there are masses of luxury hotels and new ones, including Fairmont Jakarta, are on the books to open fairly soon, and no-one in their right minds would take a tuk-tuk unless they want to spend several hours exposed to ghastly fumes as they sit for hours in traffic jams.

In Chennai this week, even on a national holidays the tuk-tuks were busy, as the gal found.  Tuk-tuks, by the way, are also known as auto-rickshaws, or tempo, trishaw, auto, rickshaw, autorick, bajaj, rick, tricycle, mototaxi, baby taxi or lapa.  Guess what, they all originate from a Piaggio Ape C, produced in India by Bajaj Auto, under Piaggio licence, from 1959 on. 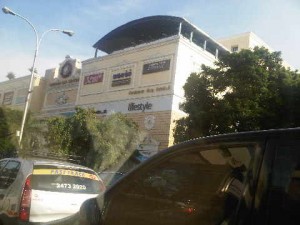 How to sum up Chennai 2012, solid traffic, a massive shopping mall behind

Chennai today is about traffic and shopping.  The malls are magnets, for entire families. Looking at things and sometimes buying things is a way of life.  Chennai is also, I am told, about filter or pressed coffee, unfortunately often much too weak, and not hot enough, unless you specifically request it.

My new friend Chitra Mahesh, who took me on a blissful behind-the-scenes ‘know Chennai tour’, insisted on having a cup of coffee when we went to visit the best-known traditional dancer in southern India, of which more anon.  Her coffee came in a metal cup in its own metal bowl. 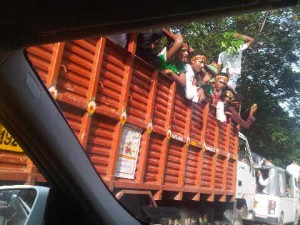 The regular traffic is complicated by a special festival ...

Chennai was known as Madras until 1996 and has a fascinating history.  It was visited by the Dutch and then the Portuguese and then the English – the East India Company built Fort St George, still one of the tourist highlights, in 1640.  Earlier, during the long Chola dynasty, it had established trade with south-east Asia as far as Bali.

The Cholas were said to be descendents of the legendary hero who gave his life to save a dove being pursued by a falcon.  They ruled from 850 through to 1243, but during that time they had a wide cultural life, with up to 48 musicians and 400 dancing girls in their courts. 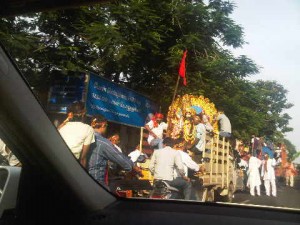 I have already seen dancers, or rather statues of them, in Chennai’s Government Museum. Enter the impressive faded-brick building and you are greeted by a faded photograph of Surgeon-General E.G. Balfour, the first Officer in Charge of what was then called the Madras Central Museum, 1851-1859.

Near his likeness are modern pamphlets published by Chennai Government Museum: two, both dated 1999, are guides to Venice Coins in the collection, by different authors.  We look at masses of dancing statues of Shiva, and his wife Parvati, some with up to four pairs of arms in different positions. 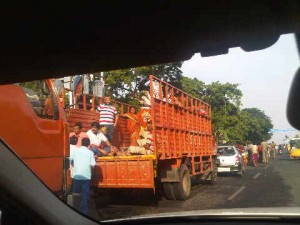 .. which will be submerged, for ever, in the waters of the Bay of Bengal

Chennai life is such a blend of history and myth and today’s beliefs that it is sometimes difficult to separate one from the other.  I coincide with Vijayad Dashmi, the end of the nine-night Navaratri festival, when the goddess Durga managed to vanquish demons.

Truck loads of people, mostly men, dressed up as if gods themselves, are bearing four-foot clay likenesses of Durga Puja.  They will take these right into the Bay of Bengal (a difficult sea, here, not recommended for swimming) and immerse them to eternity, and then go home and start constructing new Durga Puja likenesses for next year. 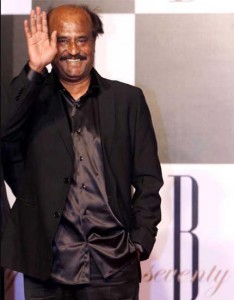 Chennai is also Kollywood, named, obviously, for Bollywood and Hollywood, and also Chennai’s Kodambakkam area, where these Tamil movies are made.  Here the best-known star is without doubt Rajinikath, born in 1950 as Shivaji Rao Gaikwad, said to be the highest paid Asian actor after Jackie Chan.

To Tamil speakers, he is even more important than Bollywood’s Big B, Amitabh Bachchan, whose 70th birthday party, one of the world’s ten best this year, was held on October 10th, 2012, at Reliance Mediaworks at Film City, Goregaon, attracted not only the great, good (and the highly successful) of Bollywood and Bombai-Mumbai but also Rajinikath himself.

Today, however, Rajinikath is said to be staying at the amazing new ITC Grand Chola Chennai luxury hotel.  I must go and check this place.